MJohnson86 looks back at the week behind us: breaking down his rosters and results through the lens of process.

Lesson of the Week: When “Keeping It Real” Goes Right

Wow. What a week. For those who have been reading this article for the first two weeks, you are aware that I was not off to a very hot start to the 2021 season. I also noted in my first two reflections some things I had learned, strategies I was employing, and that I was not overly concerned about the results because of the high variance nature of large-field tournaments. The title to this section is a reference to the Chappelle Show, a mid-2000’s comedy show on Comedy Central, and a skit they would do called, “When ‘Keeping It Real’ Goes Wrong.” The premise of the skit was based on how people always talk about “keeping it real,” but there are times where “keeping it real” can come back to haunt them. This being my first year writing for OWS and doing a reflection article weekly, there is some risk to writing an article that “keeps it real” and is fully transparent about results and ROI. A couple of my friends were having a good time joking with me about it last week – if the bad results kept up too long then none of the readers would take anything I say seriously. In other words, it would have been a situation where “keeping it real goes wrong.” Well, in Week 3 things really turned around as I took first out of 29,365 entrants in the $9 Sunday Rush tournament on FanDuel for $40,000. I also took 23rd in Yahoo’s Million Dollar Baller tournament, which awards $100,000 for first place, and had a chance late into the slate to potentially jump to the top of that tournament before slow second half finishes from DK Metcalf and Leonard Fournette didn’t allow me to keep pace. Below is the lineup that won the Rush on FanDuel. We will explore the specific aspects of this lineup, as well as some broader ideas and concepts embedded in how it all came together for my first (hopefully of many!) big score in 2021: 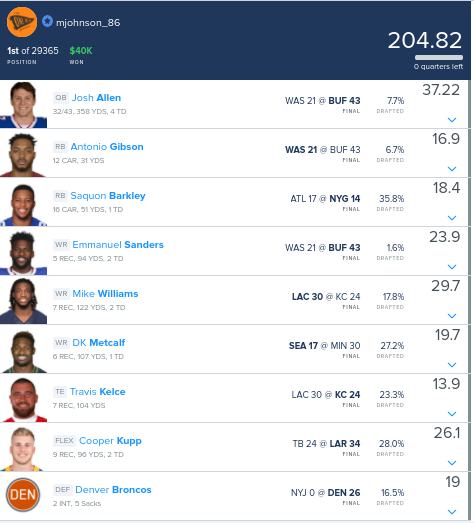 I had the Week 3 NFL Edge writeup for the WFT/BUF game so I dug into that game pretty deeply. Washington received a lot of attention during the offseason as a top-end defense but struggled in the first two weeks. In my NFL Edge writeup, I noted that the Bills would likely make a conscious effort to get their passing game off the ground since a shaky first week and then game script in Week 2 kept them grounded. The Bills are one of the most data-driven and pass-happy organizations in the NFL, so being able to use them at low ownership was very intriguing to me.

One topic that I think is important, and I discussed with JM in his Inner Circle Tuesday discussion after Week 1, is the need to build rosters for first place in any tournament you are playing in. There is no leaderboard for lowest ownership, only for total points. Obviously, ownership plays a part in it, but I found myself focusing too much on ownership and leverage angles in the first two weeks of the season and that resulted in making suboptimal decisions regarding the actual ceiling and likelihood of hitting that ceiling for many of my lineups. This week I built for ceiling first, and then once a roster was complete with players I felt really good about from a floor/ceiling perspective, I went back to determine if the roster needed to add in some leverage to differentiate. This particular roster had a “lower owned than it should be” Bills stack that was also unique in that it didn’t have Stefon Diggs in it and most Josh Allen lineups would have. With that angle and the Gibson bring back, there was zero reason to make decisions based on ownership elsewhere on the roster. Also, to tie those points together, the Bills stack was a beautiful play because it made me unique, but it did not require the most popular game environments to fail in order for its ceiling to compete. If the top games went off, Allen was still capable of being at the top of the leaderboard for the week. If the other top QB options didn’t hit their ceilings, then Allen could stand head and shoulders above the field for scoring for the week (as he did). But if the other QBs had good games, Allen’s ceiling could still compete with any of them. It is also worthwhile to note that this lineup would have taken first place in the FanDuel Sunday Million so the lineup certainly had plenty of ceiling and the ownership wouldn’t hold me back from winning any tournament.

Both Courses for the Price of One

I did not play Derrick Henry at all this week and only had Alexander Mattison on a very small percentage of my lineups on Yahoo (none on DK or FD). Mattison had a very good price-considered game, but had I played him in this lineup what would it have done to my roster? Well, Mattison was $5,200 and so was Emmanuel Sanders. The logical switch would have been there, which would have left me wanting to find a way to a different Bills WR. Stefon Diggs was $7,700 while Cooper Kupp was $7,900. If moving to the “chalky” Mattison, then moving off Kupp to Diggs would have neutralized the extra ownership involved. So while Mattison had a great game, forcing him on this roster would have actually cost me 20.7 points and knocked me from first place and $40,000 to 29th place and $200. Just an interesting real-life example of something JM often talks about in regards to those super-popular plays and the difference between “great price considered game” and “can’t win without them game.” Just by avoiding some of these plays, your roster becomes unique (no Henry / Mattison means I’m built differently than every lineup with a high-end RB or cheap RB) in other ways that can help you focus on ceiling and get you to the top of the leaderboard.

In my +EV Primer course in the Marketplace, there are several big picture strategies that came into play here. I won’t go too deeply into the specifics, as I don’t want to feel like I’m giving away the information that a lot of subscribers have already paid for, but for those who have read that course many of the topics in it led to this outcome:

Not trying to pump my own bags here, but again many of the things from my Player Pool course in the Marketplace came into play for how I chose the players on my roster. If you don’t look at the ownership “box,” all of the players in my lineup checked all of the other boxes this week, and the Broncos D was pretty much the best possible example of what I talk about looking for from a defense. In addition, the lineup met the criteria that I lay out in the course for evaluating and balancing ownership in a lineup (four checks on each side of the ledger, for those who have read the course).

As outlined in my +EV Primer course (you can find in the Marketplace – either by itself or in the bundle with my player pool course), one of my approaches that keeps me from getting too high or low week-to-week is playing consistent contests and approaching them from a season-long perspective and using that to evaluate my play and ROI. This season, in this article I will be tracking my progress on a weekly basis as I play the Single Entry (SE), 3-max, and 5-max tournaments in the $20 to $150 price range on DraftKings main slate for all 18 weeks. Rather than sweating or worrying about my ROI every week and “hoping to cash” – my goal for the season is to maximize profit relative to that long-term investment total, the results of a given week are irrelevant.

Each week I will review the best and worst of my 11 lineups from my “Roster Block” of SE/3-Max/5-Max. Below are this week’s results and you can find more information about my process/theory for this in my Week 1 Process Points article.

The “story” I was telling: I really liked this game, especially on the Baltimore side, once their defense lost a slew of players to COVID protocols late in the week. Lamar smash spots can be so defining for a slate and there was every reason to believe they would have great offensive success in this spot against Detroit, who was playing on a short week after being stomped Monday night by Green Bay. I was thrilled to end up getting the Lamar-Andrews stack at about 6% ownership each, and Swift as the bring back from the other side also at sub-10%. This game did not quite meet the scoring expectations due to some blunders by both sides, but the process was great and I’ll take that spot any day. While that game stack did perform well, it had the ingredients to be nuclear and slate-changing if a couple balls bounce differently. The other correlation I had was Metcalf-Jefferson in the MIN-SEA game. I had played both of them a decent amount the first two weeks and saw this as a great spot for both to push each other if the game became a back and forth affair. Minnesota took control in the second half, but both players did plenty of damage with their volume-secure roles and high level talents. There were leverage points involved with Scotty Miller leveraging the popular TB-LAR players and playing Tennessee defense without Derrick Henry. Those who were playing Henry at his high salary would be looking for savings elsewhere, making Tennessee Defense a cheap and easy option with correlation. Tennessee D was popular (17%) but actually provided leverage because such a high percentage of those who rostered them would also have Henry. In a scenario where Tennessee smashed the Colts but Henry didn’t have an explosion game, I’d be gaining on much of the field. Sanders and Ekeler were two of my favorite “one-off” plays of the week for their price-considered roles in explosive offenses.

The “story” I was telling: Not a fan of how this one ended up, and not just because of the results. Kyler-Rondale-Laviska I am fine with the process and results. Laviska scored all of his points in the first half before a fluky play flipped the game on its head and stripped the aggressiveness from Jacksonville. The Cardinals smashed offensively, as expected, but the running backs stole most of the scores from the passing game this week. Ridley and Hockenson are the plays I’m not that fond of, looking back. In both instances, a ceiling game was almost certainly going to be the result of a game environment producing other top score and each of them had players I liked on the other side at good prices (Saquon Barkley and Marquise Brown, respectively). Woods-Fournette as my second correlation in the lineup makes sense on some levels, but that pair lacks the explosiveness and ceiling that Barkley-Ridley or Hockenson-Brown would have provided. It would have been sharper to go with either of the latter pairings and then fill the lineup with one-offs from there.

I cashed two out of the 11 lineups. We’re making progress!! 0>>1>>2 cashes to start the year, so I’ll see you next week with three of 11!! Obviously, my week was made in other spots but I’m encouraged by my process and year-long outlook in this specific area that the article is focusing on. As we all know, one or two weeks can change everything!!