Where Sharp DFS Players Hang Out

In this weekly video, Xandamere reviews his roster-builds & process.

Maximize Your Builds With OWS + FantasyLabs

Process|Review Can Be Found In The Reflection Scroll Tuesday Nights

MJohnson86 looks back at the week behind us: breaking down his rosters and results through the lens of process.

Process Points Can Be Found In The Reflection Scroll Tuesday Afternoons

Total Entries :: 166 (149 eligible since 17 were disqualified for not using an OWS avatar and/or went over salary and didn’t enter a lineup) 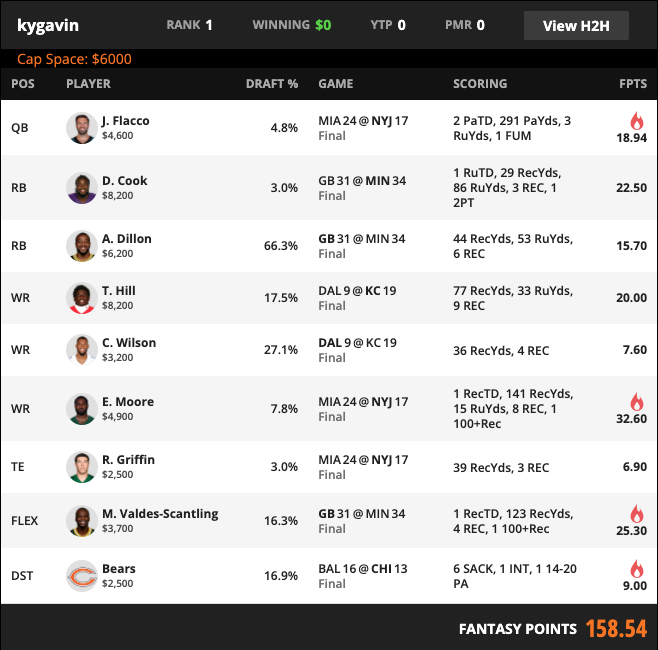 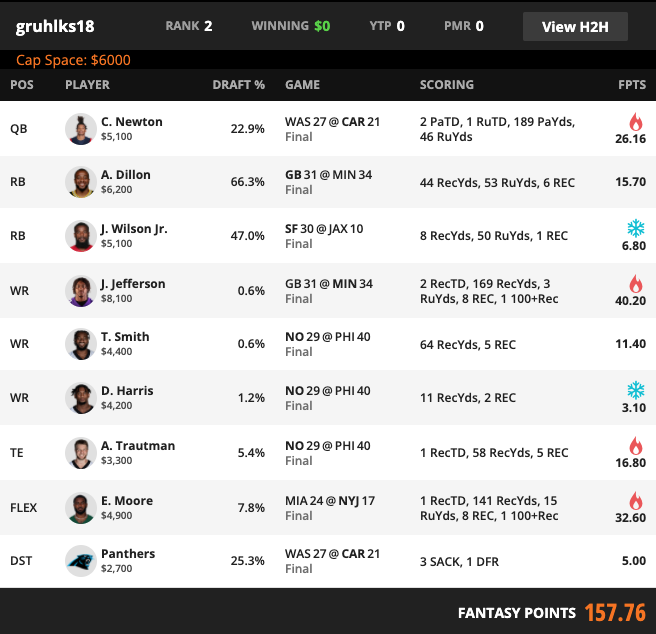 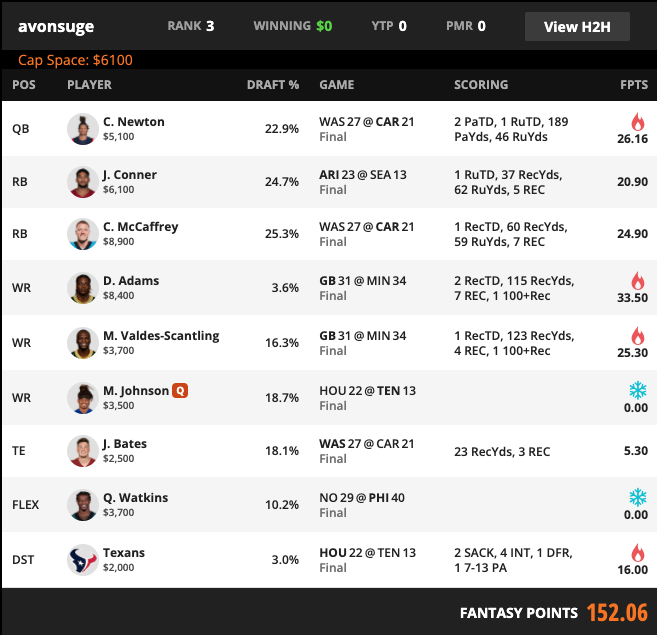 First-place finisher, kygavin, used a Jets stack of Joe Flacco, Elijah Moore, and Ryan Griffin. The matchup wasn’t projected to be high scoring (44.5 total, 7th highest) but the trio was so cheap that there didn’t have to be a high total for it to pay off. By rostering the cheaper double stack, Kygavin was then able to pay up at a few other spots in higher total games. They played opposing RBs (Dalvin Cook, AJ Dillon) in the fourth-highest scoring game on the slate and opposing WRs (Tyreek Hill, Cedrick Wilson) in the highest total game on the slate.

Second and third-place finishers, gruhlks18 and avonsuge, both played Cam Newton. Gruhlks18 did so naked which was definitely viable given Cam’s rushing abilities. Avonsuge stacked Cam with CMC and ran it back with cheap Washington TE John Bates. Avonsuge rostered the two most expensive players at their positions, CMC and Davante, taking a true stars and scrubs approach to the Bottom-Up. Even though they took two zeros, they were still just 5.8 points away from a victory.

Personally, I don’t think I would have been able to play a Jets stack in a paid DK contest but if you want to get comfortable with being uncomfortable, and rostering plays that you normally wouldn’t, the Bottom-Up contest would be a great place to do that.

I asked kygavins what made him decide to roster the Jets. Here’s his answer: “Price. Allowed me to get Tyreek and Cook. They were the guys I prioritized and the Jets stack let it happen. I thought Flacco’s chances of getting 15-20 were just as high as the guys below $6k in a decent matchup they were gonna be trailing. Biggest choice was between Crowder and Moore for me. Went for the upside targets off Moore.”  Awesome thinking and always cool to see what the winner’s thoughts were while building the lineup!

It’s pretty easy to imagine how you could be successful starting with a Bottom-Up lineup and turning it into a lineup that would smash in a paid DK contest by looking at kygavins. You could either swap in two of your less confident players for around $3k more or try to get a player with one of the biggest ceilings on the slate and still move up in another spot.  A 2v2 swap removing AJ Dillon and Cedrick Wilson and adding Jonathon Taylor and DeAndre Swift would have given you a lineup that scored 217.2 points, enough to compete for first in pretty much every GPP this week. 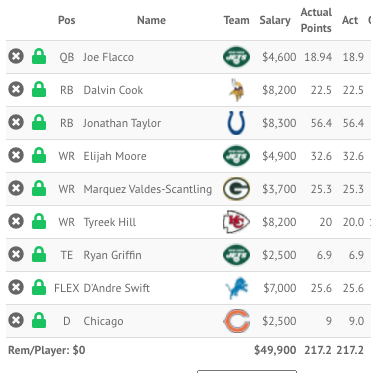 We are pumped to announce we will be having a Bottom-Up Build Tournament of Champions! The TOC will take place Week 18 and first place will win an OWS Inner Circle-For-Life ⭕️ membership with additional prizes to other qualifiers! All weekly first-place finishers will be eligible. Congrats to those who have already qualified: Sgmain18, Spastictoaster, Swench1919, Mikeall65, abright8, Andkristopher, Sklarma72, Aothomas42, Jaymz_10, Ericdc20, and kygavin.

Winner will qualify for TOC! Click here for the contest link.

Larejo123 takes a look at some of the overlooked plays and “missed opportunities” from the week behind us, identifying the thought processes and approaches that could have led us to those plays.

Missed Opportunities Can Be Found In The Reflection Scroll Tuesday Afternoons

Lex Miraglia takes a look under the hood of the Underdog Battle Royale tournament: identifying what works, what doesn’t, and what provides our best path to first place in this top-heavy, but ultra-soft tourney.

Underowned Underdog Can Be Found In The Reflection Scroll Tuesday Nights

In this weekly video, TodFromPA breaks down his ownership in The Slant against top players in DFS.