We didn’t get the Christian McCaffrey snap rate that had been alluded to by the Washington Football Team’s coaching staff leading up to the start of the regular season, but we did get some elite usage from Antonio Gibson. While Gibson only played 65% of the WFT snaps, he was the focal point of the offense when on the field. Gibson touched the ball on 23/55 WFT plays (42%) while receiving 87% of running back carries and 71% of the RB targets — hauling in three of five targets. Gibson’s 20 carries came early and often and should be expected to continue with the injury to Ryan Fitzpatrick.

What a strange game for Austin Ekeler. It may surprise you, but this was the first game in Ekeler’s career where he tallied 15+ rushing attempts with zero receptions. In fact, Justin Jackson had the only catch recorded by a LAC running back for a modest two yard gain. The Chargers have a new Offensive Coordinator, Joe Lombardi, running his own offense for the first time after previously working under two offensive Head Coaches in New Orleans and Detroit. It is possible that he is showing us his vision for his offense in his first gig without inside influence and that he may not use his running backs as often as we expected coming over from Sean Payton’s staff. Ekeler’s receiving role may be cause for concern, but I wouldn’t expect lightning to strike twice with a future dud performance like this. Expect one of the most talented pass catching backs in the league to be utilized more moving forward as Lombardi’s offensive vision becomes more clear.

After completing my process of reading The Edge in its entirety, followed by taking the information gathered there to the books, this was the strongest bet I made this week. Well, it was much closer than I thought and unexpected game flow may have provided a little bit of good luck. The Cleveland Browns were able to lead for virtually 60 minutes, staying reasonably balanced on offense. Without Odell Beckham, the Browns were set to run the ball even more as they tried to control the clock and keep Patrick Mahomes on the sideline, but fell substantially under our projected rushing attempts. The Browns have a great pass blocking offensive line which provides Baker Mayfield with ample time and space, and I will be taking a wait and see approach to how this offense looks in future games with OBJ back as soon as next week.

This bet was thrown to the wayside very quickly as the Houston Texans took a 14-0 lead into the 2nd Quarter in what was one of the more shocking game flow situations we saw in Week 1. While it would be easy to chalk this up as a variance loss on a tributary game script, I’m not sure James Robinson would have seen the usage we expected regardless of the score. Carlos Hyde looked to be more involved than first thought, and may even be the favorite for early down work. One clear piece of information we can take from this game for Robinson is that he is the favored back in the passing game, catching three of six targets for 29 yards. I will be staying away from Robinson rushing props in the short term but will look for opportunities for Robinson reception and receiving yardage props going forward with expected negative game scripts. 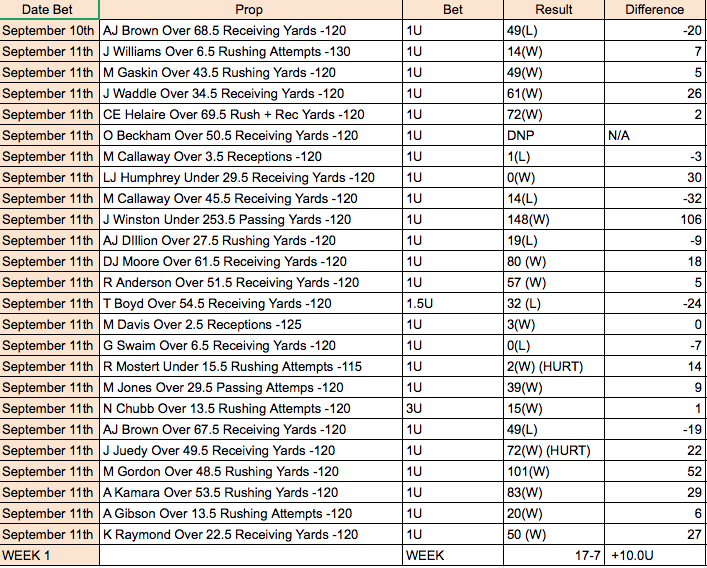 If You’re In A State With Legal Sports Betting…

“Cleveland’s likeliest plan of attack for this game should be fairly evident to even the most casual of football observers.”

“While it’s not especially likely that Baker will get there (he topped 300 only twice last season, and he was capped at 30 or fewer pass attempts a stunning 10 times).”

After identifying a low Nick Chubb rushing prop last week, we’re changing gears here and looking at Browns QB Baker Mayfield this week. We can expect the Browns to play from ahead for most, if not all, of this game with Vegas setting the spread at Cleveland -13. Hilow highlights an expected range of rushing attempts between 27-31, paired with a slight increase of total offensive plays this week from last week’s 59. Together, these projected totals make it hard for Baker to reach the 35 pass attempts needed to lose this prop. In 2020, Baker only exceeded 34 pass attempts in 4 of 16 games. It is hard to imagine the Browns will need him to exceed that number this Sunday in a game featuring a favorable matchup for their running backs and offensive line. With the additional week of rest for Odell Beckham Jr, the Browns will be content to run this one out.

“Montgomery and Mixon both have game scripts that lead to 30 touch games.”

“The Bears preferred method of attack is on the ground, where they’ll look to feed David Montgomery for as long as the game is competitive.”

“Expect the Bears to give Montgomery every opportunity to exploit the soft underbelly of the Bengals’ defense.”

“If the Bears run it successfully all game, Montgomery could lead the slate in touches.”

Despite trailing the Los Angeles Rams from start to finish in Week 1, David Montgomery received 16 carries as the Bears unquestioned lead back. This week, we should expect a much more favorable game script for Montgomery and increased usage as the Bears try to keep the clock running while hiding Andy Dalton. While Damien Williams saw increased usage in Week 1, I don’t see him as a threat to Montgomery’s carry total and an obvious candidate for regression on his 43.5% snap rate. Like JM, I consider myself a rookie year Montgomery truther that may have given up too quickly (how odd?), and after seeing high usage in an unfavorable matchup last week, want to jump Montgomery usage props before they rise.

“Josh Allen should have a clean pocket most of the day.”

“Allen should once again throw the ball 40+ times.”

“Both teams played at a high pace and with a decent amount of no-huddle in Week 1. I would expect the same here as that is at the core of who the Bills are and the Dolphins are smart enough to know they need to be aggressive and score early to have a chance to win.”

The Buffalo Bills have no desire to run the ball, shown by their 21.5 running back touches per game last year (30th). Sure, they will run the ball now and again, but when you have Josh Allen as your quarterback, you might as well allow him to impact the game as often as possible. This matchup suits Allen and the rest of the Bills skill players well, as the Dolphins played man coverage at the highest rate in the NFL in 2020. Expect Diggs, Sanders, and Beasley to put their elite route running on display, routinely getting open versus the strong Dolphins secondary. With both teams playing up-tempo, we can expect to see more than enough volume for Allen to shoot past his 38.5 prop and finish well into the 40s in most game scenarios.

“Seattle boasts a mismatch in the trenches and is expected to utilize Chris Carson as a true workhorse.”

“Running back Chris Carson saw 19 of the 23 available running back opportunities for the Seahawks in Week 1 and backup running back Rashaad Penny is expected to miss Week 2.”

“Chris Carson has room for 20-24 running back opportunities in this case.”

The Seahawks came out in Week 1 with a 49% situation-neutral pass rate, down from 60% in 2020. It appears new Offensive Coordinator Shane Waldron does not subscribe to the #LetRussCook movement and will bring a more balanced offensive attack with him from the Los Angeles Rams (56% situation-neutral pass rate in 2020). The Seahawks offensive line came out in Week 1 and paved the way to the second-highest adjusted line yards in Week 1 at 5.37. With Rashaad Penny already ruled out, we can expect Chris Carson to dominate backfield touches after turning 16 carries into 91 scoreless yards last week. With Carson popping for both JM and Hilow, I think the odds we see Carson surpass 15 rush attempts are quite good.

One of the major advantages of online sports betting is that you can carry accounts with multiple sports books in order to quickly/easily shop for the best line for the bet you want to place. Every week in Edge Bets, you’ll have access to this Player Props Tool from our friends at ActionLabs (click the orange “LABS” below), in which you’ll be able to see at a glance where the Best Lines are.

Thanks for hanging out with us in The Scroll this week!

We’ll see you at the top of the leaderboards this weekend!