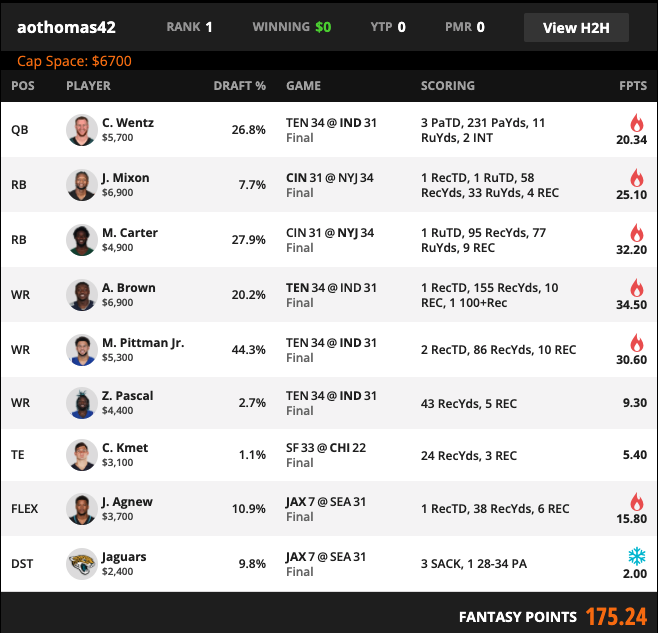 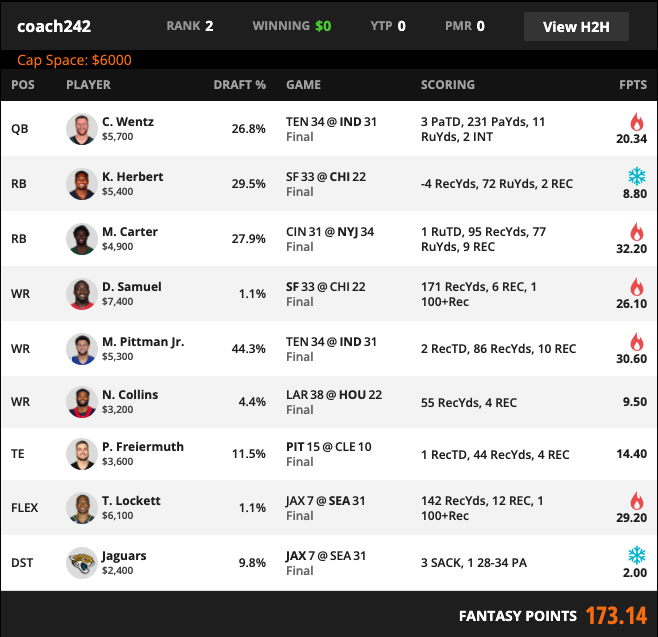 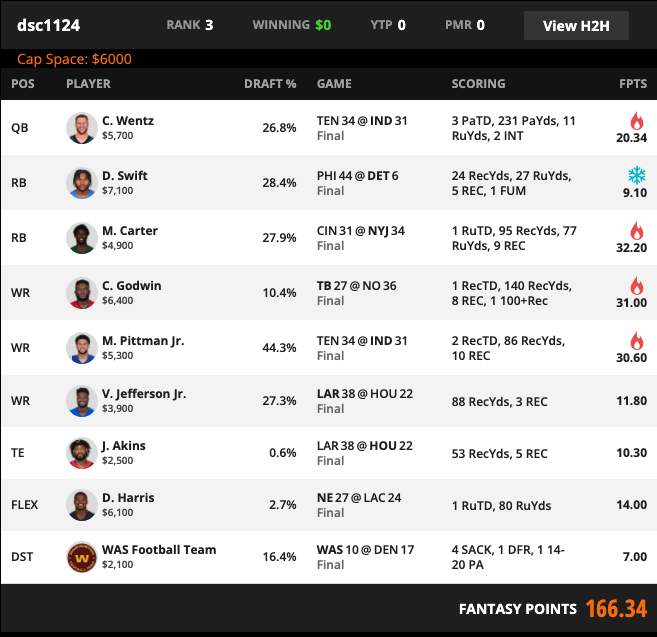 This week there were a bunch of similarities in the top three lineups. They all played the highest owned stack in the tournament, Wentz + Pittman, which came from the highest total on the week and had a close spread of three. The top three lineups also played Michael Carter in a game in which the Jets were projected to be trailing. The week prior, Carter saw nine targets to go along with 11 rush attempts.  If the Jets were trailing, Carter was likely to be very involved in the passing game, and if the Jets were playing well as they did, Carter was also going to be part of the reason for that.

First-place finisher, Aothomas42, really attacked the Colts-Titans game using four players from it. On the Colts side, he rostered Wentz, Michael Pittman, and Zach Pascal.  What set him apart was running it back with AJ Brown which made a ton of sense if you had the salary to do it. He also rostered opposing RBs, Michael Carter and Joe Mixon, which can make sense if one is going to be ahead and get all the rush work, and the other is trailing and getting the pass game work. Aothomas42 was the only one of the top three to hit on both their RB choices.

Coach242 got close to the very top of the leaderboard by playing the Wentz + Pittman stack and also had a mini-correlation of Khalil Herbert and Deebo Samuel. This was an interesting game to build around with the low total but they rostered the two players likely to get the majority of the work from each team. They had no other correlations, instead finding a path to leave plenty of salary in his flex position, choosing to pay up for Tyler Lockett.

The third-place finisher, Dsc1124, had a cheap mini-correlation of Van Jefferson/Jordan Atkins from the same game. Although neither of these players went “off,” they still were solid enough to help the lineup push its way towards the top. Their most expensive play, D’Andre Swift, didn’t pay off but their next expensive player did, Chris Godwin. The Jefferson/Atkins correlation was solid enough to let their stack, mini-correlation, and Godwin push them towards the top.

The BUB field was very sharp this week! Wentz + Pittman, the highest owned stack, was used in several winning lineups across DK including the Milly Maker, the Wildcat, and the Redzone, to name a few. You could easily look at the top three lineups this week and see similarities between the top lineups in the BUB and with what won in other DK GPPs. This was a perfect game environment to build around for the BUB because it had a high total, was projected to be competitive, and offered plenty of value. Starting with a Bottom-Up Build lineup and substituting a few, expensive players that have big ceilings is an easier way to build, and can be an easy way to find yourself at the top of the leaderboards!

We are pumped to announce we will be having a Bottom-Up Build Tournament of Champions! The TOC will take place Week 18 and first place will win an OWS Inner Circle-For-Life ⭕️ membership with additional prizes to other qualifiers! All weekly first-place finishers will be eligible. Congrats to those who have already qualified: Sgmain18, Spastictoaster, Swench1919, Mikeall65, abright8, Andkristopher, Sklarma72, and Aothomas42.