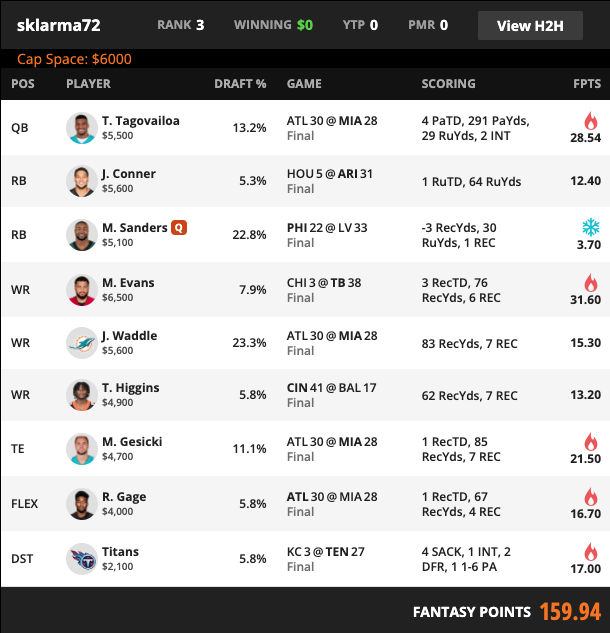 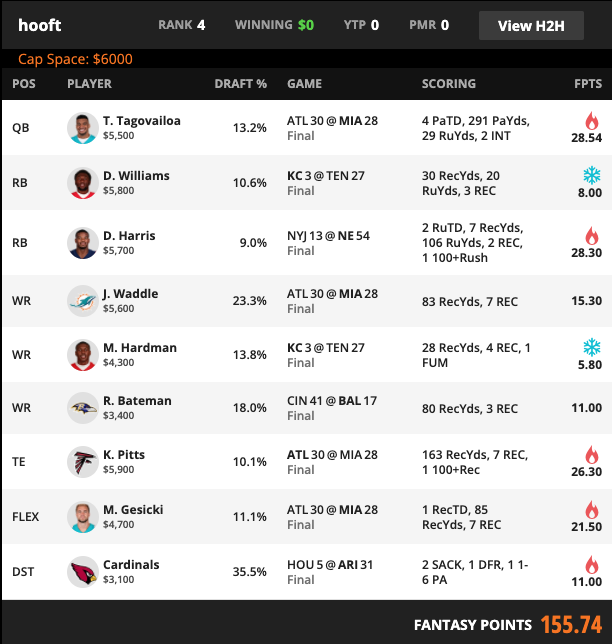 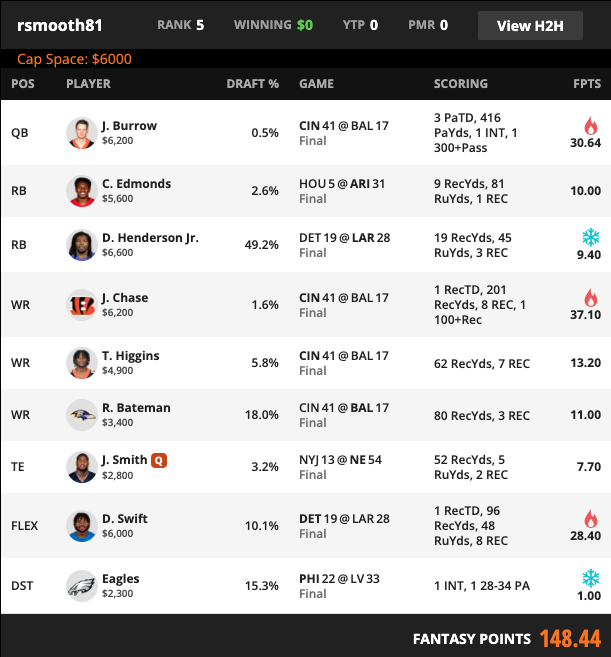 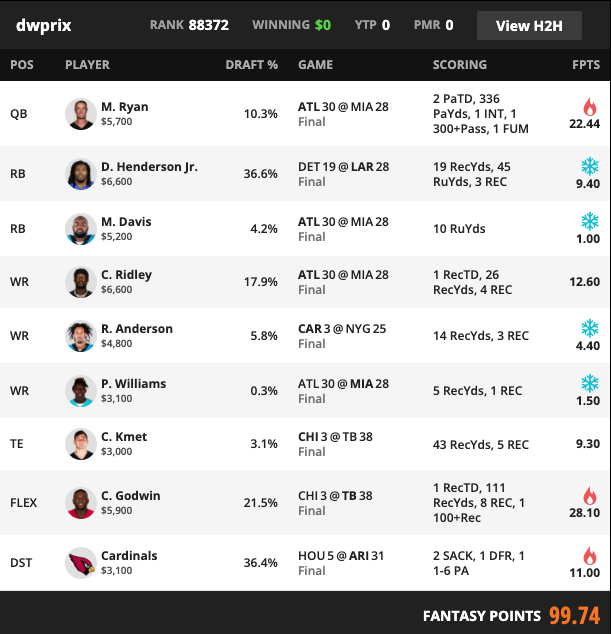 Sklarma72 is in the Tournament of Champions! His winning lineup was based around a lower-owned game environment between the Dolphins and Falcons. It consisted of a double-stack built around Tua Tagovailoa with Jaylen Waddle + Mike Gesicki, and a run back with Russell Gage. This game was the fifth-highest total and was projected to be one of the closest with a 2.5 point spread. It was thought to be a competitive game that had a slight chance of shooting out. Sklarma did an excellent job at finding value on the week with their only real dud coming from Miles Sanders who got hurt.

Hooft’s second-place finish was also pushed near the very top of the leaderboard with the Dolphins / Falcons game environment in mind. They used the same stack as Sklarma (Tua + Waddle + Gesicki) but added Kyle Pitts instead of Russell Gage, choosing to use both TEs in his lineup and both TEs in this same game.

Rsmooth81’s lineup chose to attack the Bengals and Ravens game which I’m kicking myself for not playing this week (I think I’ve played Joe Burrow and Ja’marr Chase every week except one or two and have them on my main season-long team). The Ravens were big favorites (6.5) which set up well for Burrow to throw a bunch. He tied his season-high in attempts (38) and yards (416) leading to his fourth straight 20+ DK point game and has 2+ TDs in every game so far. This was a double-stack, run-back consisting of Chase + Tee Higgins, and Rashod Bateman. How Burrow was only .5% owned and Chase 1.6% owned is baffling. Their prices we high-ish for the max salary rule but Rsmooth81 was literally the only one to play Burrow and Chase.

Surprisingly, none of the top three finishers used Chris Godwin who was one of the most popular plays on the slate and ended up paying off with 28.10 DK pts. The chalkiest player on the slate and in the BUB, Darrell Henderson, was faded by the top two finishers. He was a great play that was owned by half the field (including me) that just didn’t pay off. The BUB field was smart and hopped on Dante Pettis (15.54 DK pts) after Sterling Shepard was announced inactive. He was only 4.72% owned in the Milly Maker but 20.63% in the BUB, making him the tenth highest player owned. All of the top three finishers played a double-stack and run back. Only two times has a top-three finisher used a naked QB. Albright8 won with a Trey Lance/Eli Mitchell stack, but Mitchell isn’t really a pass-catching back so I would classify this as more of a block than stack. If you count this as a naked QB, only three of the 21 top finishers this season have used a naked QB. It goes to show how important lineup construction, game environments, and using stacks are to get to the top of the leaderboards.

JM has recently talked about reviewing your early week thoughts or notes. Typically, my process starts with writing down all the games in order of totals from high to low.  I leave space so I can jot down some personal thoughts on every game and fill out my BUB sometime early in the week. Usually, I have more notes for the higher totals and the lower total games of course have less. The Bengals and Ravens were the eighth-highest total so not great, but one of the first things I wrote down this week was “I like this game.” I ended the week only on the Ravens side playing Lamar Jackson, Marquise Brown, and Rashod Batemen even though the Bengals were more likely to be throwing being the underdog. Even if the Bengals were playing from ahead, it would have meant Burrow and the offense would probably be playing well. When I built my BUB, I put CJ Uzomah (24.10 DK pts) in but didn’t play him anywhere else this week even though the Ravens were giving up a ton of pts to TEs (and now give up the most at 20.4 DK pts/g). This all goes to show how important it is to go back and review your early week notes, your “gut instinct calls,” and your independent research. We can get lost in what everyone else’s opinion is and/or rely too much on projections that we forget our own thoughts and research later on in the week.

We are pumped to announce we will be having a Bottom-Up Build Tournament of Champions! The TOC will take place Week 18 and first place will win an OWS Inner Circle-For-Life ⭕️ membership with additional prizes to other qualifiers! All weekly first-place finishers will be eligible. Congrats to those who have already qualified: Sgmain18, Spastictoaster, Swench1919, Mikeall65, abright8, Andkristopher, and Sklarma72.