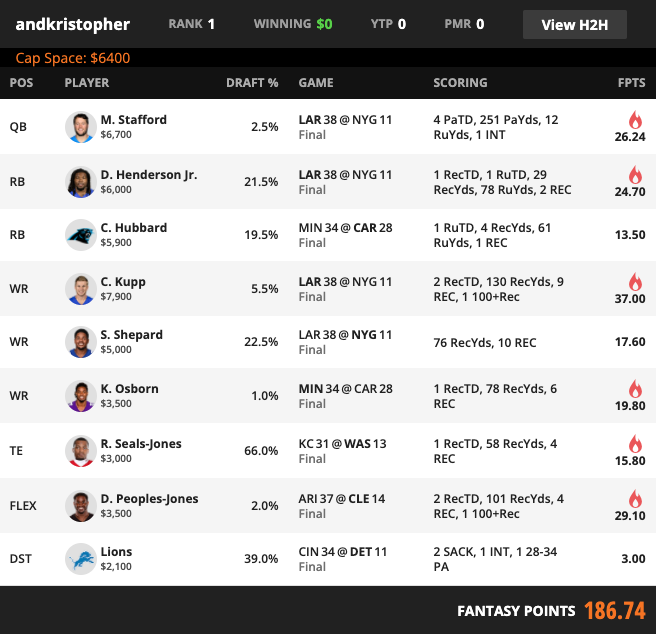 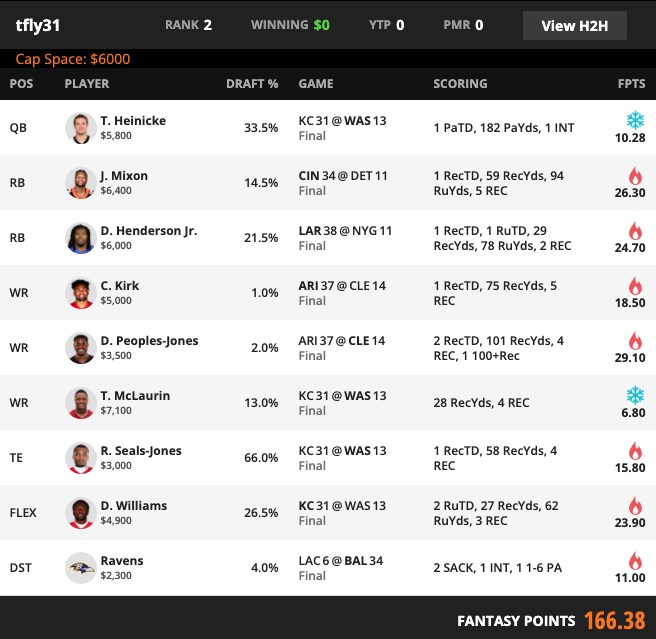 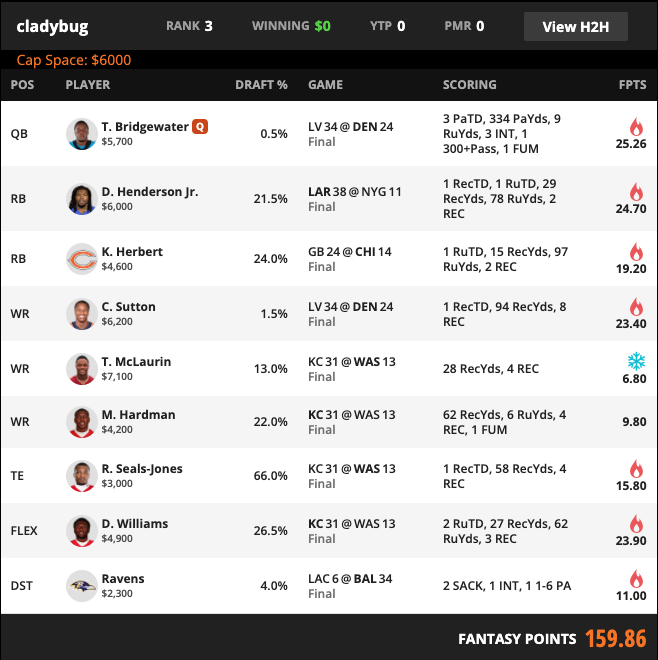 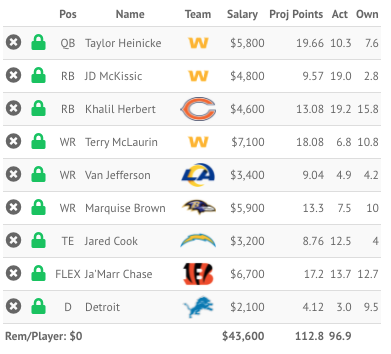 First place finisher, Andkristopher, chose to build a stack around the Rams who were facing the giants and gave up 44 points to the Cowboys the week prior. This matchup had the fourth highest total on the slate, and the Rams had the second highest team implied total. They were set up to smash in this spot. Andkristopher chose to roster both Matthew Stafford and Darrell Henderson, which in most cases might be seen as negatively correlated. Using this game environment, coupled with the smaller field size, made sense if you thought Stafford could start hot, causing the Rams to get up big, which would allow McVay to ride Henderson the rest of the way (LAR led 28-3 at half).  The total stack and run back consisted of Stafford, Henderson, Cooper Kupp, and Sterling Shepard.

Tfly31’s second place lineup was built around the Chiefs and Washington Football Teams game. The Chiefs were expected to win big. With Clyde-Edwards Helaire out, Darrel Williams was stepping into a full-time role. Williams was expected to get the majority of the RB touches in a game they were expected to be ahead in. When one team is ahead big, obviously the other team should be throwing more. Taylor Heinicke proved in his first three starts he can be a decent DFS quarterback with three straight 20+ DK point games and was facing a Chiefs team who have been one of the worst defenses at stopping the pass. Heinicke and Ricky Seals-Jones were the top owned stack in the BUB contest, and rostering Williams and Terry McLaurin in addition from this game made their lineup unique.

Third place finisher, Cladybug, played a single stack of Teddy Bridgewater and Courtland Sutton, and instead of running it back, they rostered four players from the Chiefs/Washington Football Team matchup (Williams, Seals-Jones, McLaurin, and Mecole Hardman).  Bridgewater plus Sutton paid off in a game that went well over its expected total of 44, with 58 total points scored. This game was massively overlooked by the field. Cladybug was the only one to roster Teddy Bridgewater, and Courtland Sutton was only rostered in two other lineups!

The top three lineups had stacks that were built around different game environments but all three rostered Ricky Seals-Jones and Darrell Henderson, perhaps the best two plays for the BUB tourney this week. They both had excellent price-considered floors with high ceilings given their matchups, making them great core pieces this week for the BUB.

Matthew Stafford has now made four appearances in the top three of this tournament to start the season. Teddy Bridgewater plus Courtland Sutton have found their way in the top three twice this season. This is the second time Darrell Henderson has been in the winning lineup.

Finding players who fit into the $44k requirement is a great starting point when creating rosters for regular DK contests. You can either move higher priced stacks in, keep the lower priced stack in while moving higher priced “floating plays” in, or keep the QB and pay up for the other players in the same game environment.  Building this way gives you plenty of options to be creative when building, and can be a great starting point when building lineups for the week.  Not only are you researching value plays, but also game environments that could be going overlooked.

First place finisher, Andkristopher, blew the field out of the water winning by 20 DK points. This is the highest qualifying lineup we’ve seen in the Bottom-Up Build tourney this season! Congrats on the excellent lineup and we’ll see you in the Tournament of Champions Week 18!

We are pumped to announce we will be having a Bottom-Up Build Tournament of Champions! The TOC will take place Week 18 and first place will win an OWS Inner Circle-For-Life ⭕️ membership with additional prizes to other qualifiers! All weekly first place finishers will be eligible. Congrats to those who have already qualified: Sgmain18, Spastictoaster, Swench1919, Mikeall65, abright8, and Andkristopher.