Each week I will review the Bottom-Up Build contest, looking at how the winner got to the top of the leaderboard. The purpose of the Bottom-Up Build is to put players in that you would feel comfortable rostering in a regular contest (price considered floor and high ceiling) so that when you’re building for these other contests, you’re not struggling with the last couple spots and jamming someone in that you are uncomfortable with. 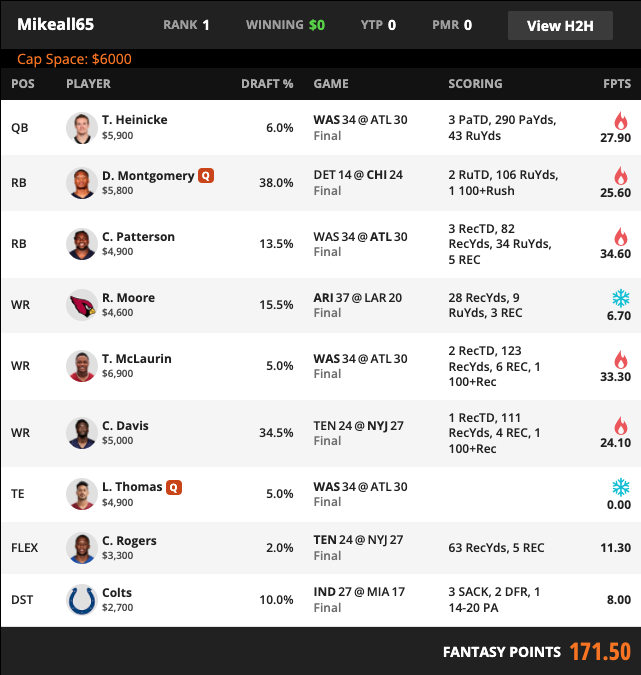 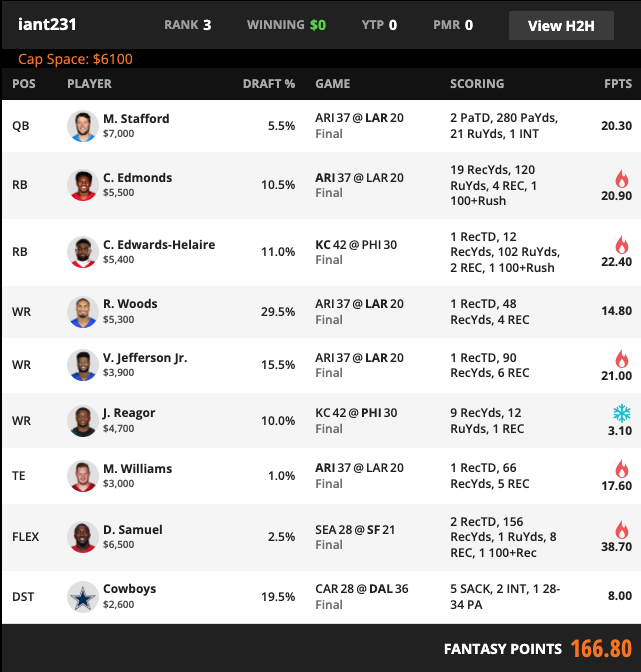 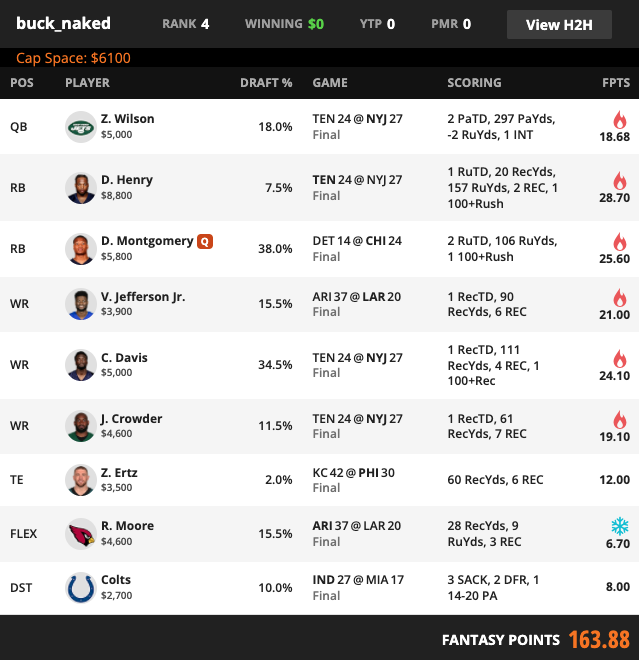 Week 4 winner goes to Mikeall65 with the highest Bottom-Up Build score of the season, 171.50 points. Mikeall65 chose to build around a sneaky, potential shoot-out game with the sixth highest point total. Their stack of Taylor Heinicke and Terry McLaurin was owned by only five other rosters in the field. They won despite having some bad luck, rostering Logan Thomas who got hurt early and didn’t have any DK points.

Second place finisher, iant231’s lineup consisted of a double stack and double run back, using five players from the AZ at LAR game. They also included a mini-correlation from the TEN at NYJ game. Iant231 was the only one of the top three not to roster David Montgomery, the highest owned player on the week. Instead, they chose Clyde Edwards-Helaire and Chase Edmonds who were in high total games and priced even cheaper than Montgomerey.

Third place finisher, Buck_Naked, built around the TEN at NYJ game stacking Zach Wilson, Corey Davis, Jamison Crowder and ran it back with Derrick Henry.  Wilson plus Davis was the chalkiest stack in the tournament but Buck_Naked found a way to differentiate by also including Crowder, and running it back with Derrick Henry.  This was a game stack that Hilow mentioned he played in regular DK contests this past week.

The top three lineups had stacks that all came from different games. All of them had at least a double-stack and run back. There were several lower-owned, cheaper stacks that you could’ve played this week. Many of the biggest prizes in DK gpps were taken down by a cheaper stack.

Several RBs under $6k hit value including Clyde Edwards-Helaire (4.15x), Chase Edmonds (3.8x), Cordarrell Paterson (7.06x), and David Montgomery (4.41x). We also had several cheap QBs in low-owned game environments hitting, including Sam Darnold (6.09x), Daniel Jones (5.31x), Matt Ryan (5.37x), and Taylor Heinicke (4.73x).  Although game environments and nailing the position is important, what we’ve seen in this tournament so far is that getting one or two players who can score 30+ is very important. These massive scores can make up for other duds in your lineup which we saw this week with the winner rostering a goose-egg due to bad luck.