Total Entries :: 116 (105 eligible since 11 were disqualified for not using an OWS avatar and/or went over salary and didn’t enter a lineup). 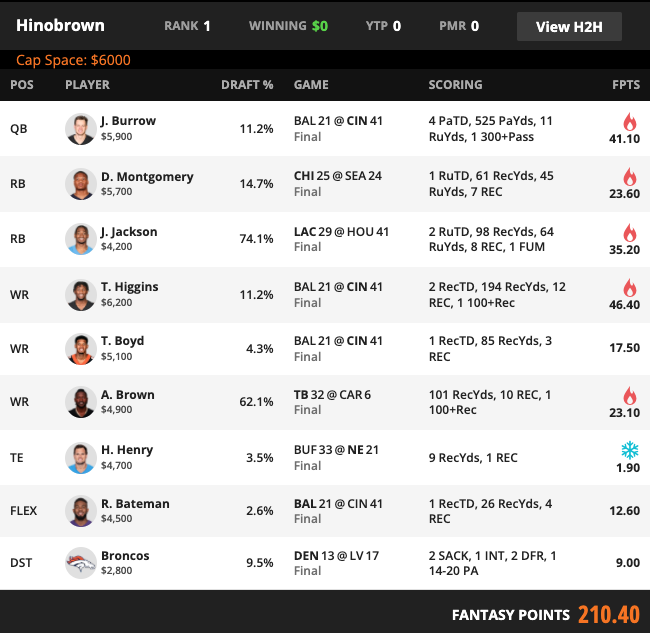 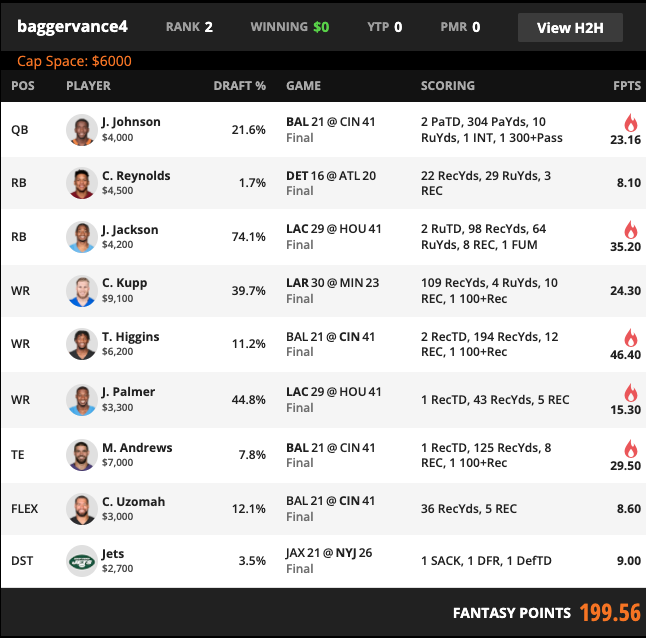 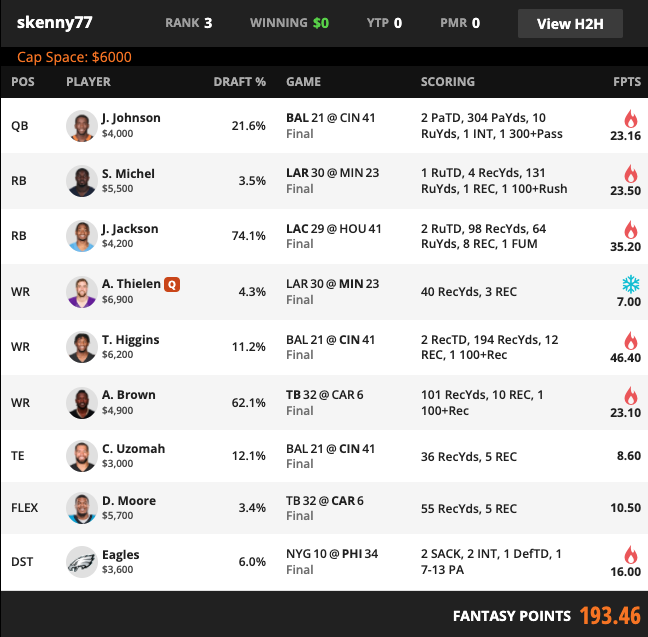 Congrats to Hinobrown who took down the Bottom-Up tourney this week with the highest score all season, 210.4! They built around the Ravens/Bengals game double stacking Joe Burrow with Tee Higgins + Tyler Boyd and brought it back with Rashod Bateman. The matchup had the Ravens favored by seven with a total of 43.5 and had a ton of playoff implications, meaning both teams were going to give it their all. The total went well over, with 62 points, and ended up being the second-highest total on the slate. The Ravens are giving up the most pass yards in the league this season at 280.5 per game. Burrow torched them becoming just the 21st player to throw for over 500 yards in a game. His 525 yards broke the franchise record of 490 yards previously held by Boomer Esiason. Higgins (46.4) and Burrow (41.1) ended up being the top two highest-scoring players, not only on the slate but of any players in Week 16.

The second and third-place finishers, Baggervance4 and Skenny77, also built around this game, both rostering the QB on the other side, Josh Johnson. Baggervance4 played Johnson with Higgins + CJ Uzomah and ran it back with Mark Andrews, while Skenny77 went with a naked Johnson but also played Higgins and Uzomah on the other side. Johnson was the bare minimum at $4k and was made the starting QB after Tyler Huntley was ruled out.

I’m really kicking myself for not playing Burrow this week. I’ve played him several times this season and had him in my only season-long team this year. As a result, I struggled in SE/3-max and had no shots at first place. I cashed zero of seven GPP lineups.

That being said, I was able to win all of my double-ups with a score of 148.96. Unfortunately, I’ve been playing way less cash game volume than I was to start the season and in previous years. This week, I thought it was a viable strategy to pay all the way down at QB in cash with Josh Johnson (and apparently I was one of few based on his ownership in cash). Johnson needed just 14 points to pay off 3.5x. OWS gave him a median projection of 17 points and Fantasy Labs had him at 16. I thought to myself, “how many times does a $4k player fail at any other position and truly crush you in cash?” At only $4k as a QB, I thought he had one of the safest floors and had a great shot at a 4-5x score. It was also a week where we had extreme value at the running back position with Justin Jackson ($4.2k) and Ronald Jones ($5.1k), both being thrust into massive roles at low prices. James Robinson ($5.9k) and Alexander Mattison ($6.8k) were also slated for massive roles with Dalvin Cook and Carlos Hyde both inactive. Playing Johnson, Jackson, Jones, and Robinson allowed me to pay up for Cooper Kupp and Tyreek Hill. Both of these players have massive ceilings and it could be said that Kupp has the safest floor of any player this season, which we typically don’t say about a WR (now that I say that, he will have a dud next week!). Travis Kelce was ruled out which would usually mean more targets for Tyreek. Unfortunately, the Steelers were able to keep that from happening. Overall, I was disappointed in my GPP play but was able to win in my cash games, minimizing my losses on another COVID-stricken week.

On to the final week of the regular season! We will still be running the usual Bottom-Up tourney and will also have the TOC. I’ll try to post the link in Discord and on Twitter so you can follow along if you want!