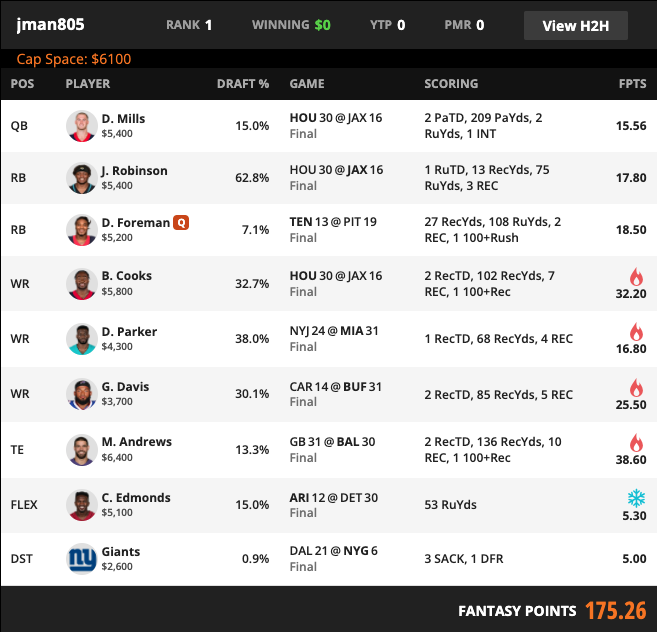 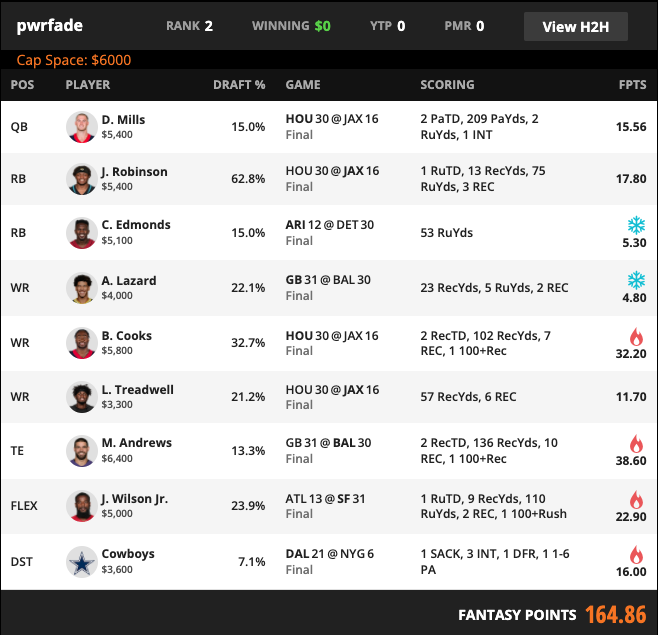 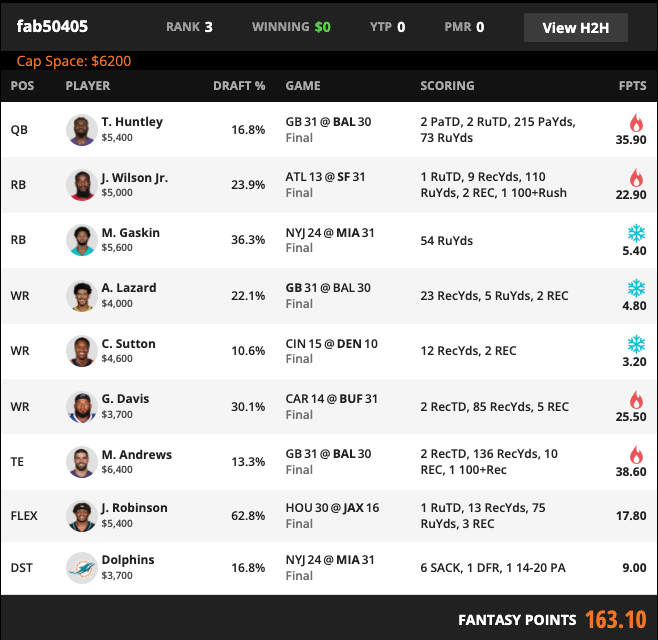 Congrats to first place finisher, Jman805. Both the first and second place lineups played a Davis Mills/Brandon Cooks stack. The Texans/Jaguars game had a total of only 40 with the Jaguars favored by six. This should mean that the Texans were likely going to be trailing and needing to throw while the Jaguars would likely be ahead and could kill the clock with the run game. The way the game actually went was the Texans and Mills played well, and Mills connected with Cooks for both of his passing TDs. The Texans and Tyrod Taylor started the season with a 37-21 win over the Jags. One could have argued that their Week 15 matchup would be closer than the Vegas spread indicated since it was a division game and the Jags were favored even though they lost to the Texans earlier in the season. All of the top three finishers rostered James Robinson who was only $5.4k, a home favorite, and expected to get the majority of the RB work with Carlos Hyde out. He was the highest owned player in the Bottom-Up and the majority of other GPPs. Second place finisher, Pwrfade, also rostered Jags WR Laquon Treadwell ($3.3k), who has now seen 9, 6, 5, and 8 targets over his last four. This game environment was heavily owned in the Bottom-Up (Robinson-62.8%, Treadwell-21.2%, Cooks-32.7%, Mills-15.1%, Nico Collins-14.2%, James O’Shaughnessy-9.73%) for having a total of just 40 but there was plenty of value to be had.

Third-place finisher, Fab50405, built around the Ravens/Packers game, stacking Tyler Huntley and Mark Andrews with Alan Lazard as a run back. Anytime Huntley has played the majority of the game, Andrews has had a big day. He led the team in reception yards (73, 115, 136) and targets (10, 11, 13) leading to DK point totals of 15.3, 31.5, and 38.6 points with Huntley at QB. The top three lineups all had Mark Andrews who was the highest-scoring player on the slate (Huntley was second).

Different strategies need to be taken into account for different types of contests and field sizes. In small fields like the Bottom-Up, rostering several players from the same game can really pay off. This is a viable strategy if you’re trying to capture all of the offense points from one side or hope the game blows up, rostering multiple players from both sides. In cash games, the majority of the time I’m trying to avoid rostering multiple players from the same team. if the total is low and the game fails, you likely have several duds in your lineups.

I had a pretty much break-even week. I won all of my double-ups with a score of 130.5 and cashed three of seven SE 3 Max lineups. This was such a crazy week with all the COVID inactives that I didn’t feel as prepared as I usually do and relied on projections a little more than normal. I was definitely nervous going into the slate but escaped with a tiny 6.3% profit. The last week of the season I will share my season-long results (it hasn’t been great). I’ve had difficulty doing this throughout the season but hopefully we will get to a point next season where I’m confident enough to do so without it affecting my process and results.

We are pumped to announce we will be having a Bottom-Up Build Tournament of Champions! The TOC will take place Week 18 and first place will win an OWS Inner Circle-For-Life ⭕️ membership with additional prizes to other qualifiers! All weekly first-place finishers will be eligible. Congrats to those who have already qualified: Sgmain18, Spastictoaster, Swench1919, Mikeall65, abright8, Andkristopher, Sklarma72, Aothomas42, Jaymz_10, Ericdc20, Ottoball, Sobe1, Bigdogkyle, Black-eyed_god, and Jman805.