Total Entries :: 146 (130 eligible since 16 were disqualified for not using an OWS avatar and/or went over salary and didn’t enter a lineup) 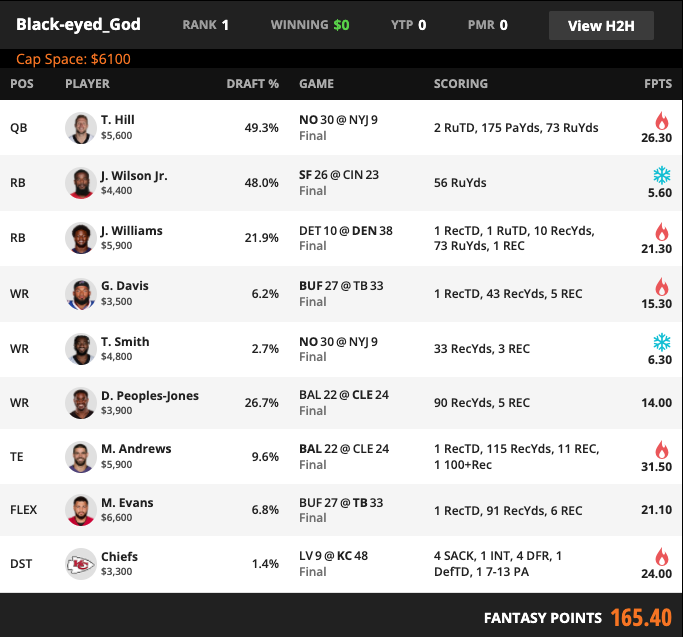 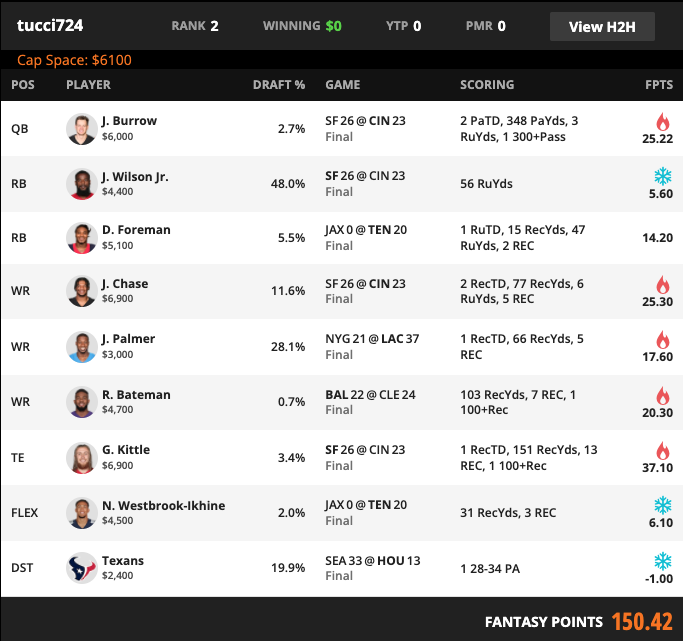 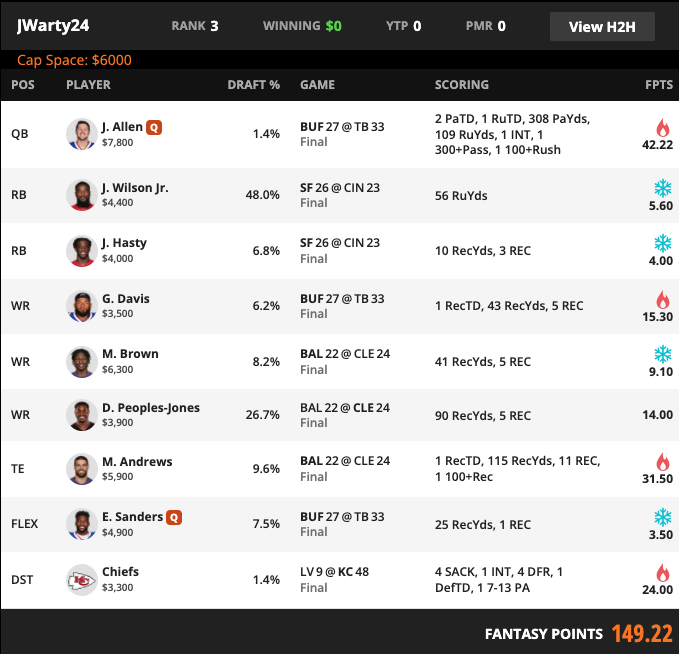 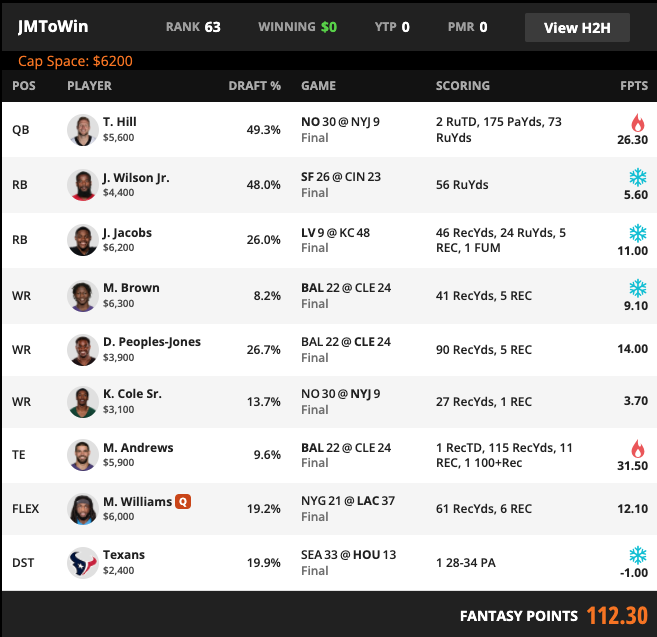 Congrats to first place finisher, Black-eyed_god! He’s been playing in the Bottom-Up contest consistently since it started last year! Great to see you take it down and welcome to the TOC. Black-eyed_god played Taysom Hill, who was perhaps the best value play on the board this week. He paid off with two rushing TDs scoring 23.6 DK points total against the Jets who are allowing the most rushing TDs per game (1.8). Black-eyed_god also got exposure to the Bucs/Bills game which had the highest total on the slate and was the only game above 50 points (53), playing Mike Evans and Gabriel Davis who both scored.

Second place finisher, Tucci724, built around the second-highest total on the slate, 49ers/Bengals. They stacked Joe Burrow and Ja’Marr Chase, running it back with George Kittle and Jeff Wilson on the other side. The 49ers built a 14 point lead but the Bengals came back in the 4th quarter pushing the game to overtime. Burrow, Chase, and Kittle went for 87.6 combined points and paid off 4.4x salary. Wilson didn’t find much success on the ground with Deebo taking away carries but he was so cheap with Eli Mitchell out that it was still a great play, especially for the Bottom-Up.

The third place finisher, Jwarty24, paid up for Josh Allen ($7.8k), stacking him with Gabriel Davis and Emmanuel Sanders with no Bucs player. This was by far the best game environment on the slate as the only total above 50, which was 4.5 points higher than the next closest total. Allen was expensive which led him to be just 1.4% owned in the Bottom-Up. Jwarty24 also rostered two 49ers running backs, Jeff Wilson and JaMycal Hasty, trying to capture 100% of the 49ers RB opportunities. With Mitchell out and the 49ers typically being more run-heavy, it was a good strategy but the 49ers didn’t find much success on the ground as Hasty saw no carries with only three targets. Deebo Samuel also continued to steal rush attempts (which is unlikely to go away) and turned his 8 carries into 37 yards and the 49ers only rushing TD.

Most GPPs were taken down with Josh Allen at QB who had the most DK points of any other player on the slate. The Bucs/Bills game was the best environment with a total of 53, the highest on the slate by 4.5 points. A lot of ownership was taken away from Tom Brady and Josh Allen by Taysom Hill. I only built three lineups this week (usually I’m at around 7-10 + a cash lineup) and two were built around this game, one with Brady and one with Allen. My other lineup had Jimmy Garoppolo at QB, building heavy around the second-highest total. I thought Taysom was a rock-solid cash game play but was concerned about his ceiling with Alvin Kamara back. All three lineups cashed and I’m disappointed I didn’t have more time to build lineups. For me, some slates just seem clearer and more obvious. This was one of those, but unfortunately, I had a busy weekend and only played about 25% of my normal weekly bankroll and zero cash.

We are pumped to announce we will be having a Bottom-Up Build Tournament of Champions! The TOC will take place Week 18 and first place will win an OWS Inner Circle-For-Life ⭕️ membership with additional prizes to other qualifiers! All weekly first-place finishers will be eligible. Congrats to those who have already qualified: Sgmain18, Spastictoaster, Swench1919, Mikeall65, abright8, Andkristopher, Sklarma72, Aothomas42, Jaymz_10, Ericdc20, Ottoball, Sobe1, Bigdogkyle, and Black-eyed_god.