Total Entries :: 148 (135 eligible since 13 were disqualified for not using an OWS avatar and/or went over salary and didn’t enter a lineup) 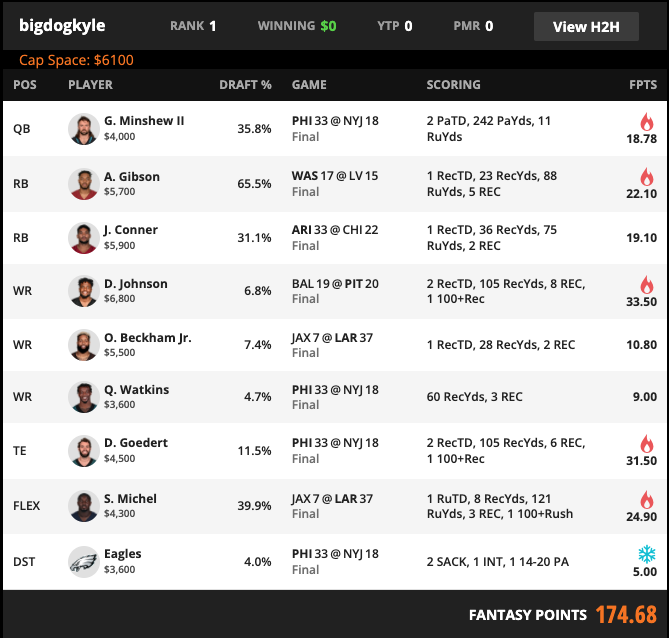 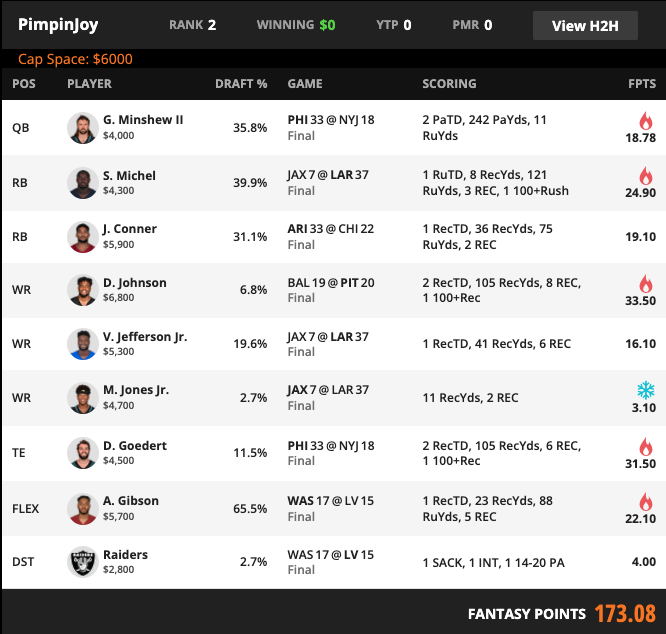 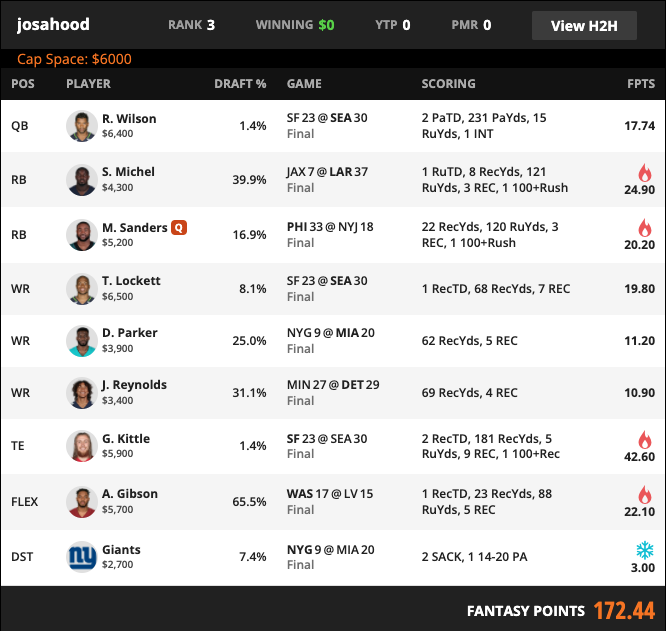 First-place finisher, Bigdogkyle, found the value on the Eagles, rostering a double stack with no run back, and instead rostering the Eagles D (Gardner Minshew + Quez Watkins + Dallas Goedert). The line opened with the Eagles favored by 7, moving down to 5 once Jalen Hurts was ruled inactive. Minshew was the bare minimum $4k in salary and he was playing the Jets who have allowed the most points per game in the league (30.6). The Eagles had an implied point total of 24 points so Vegas expected three TDs. JM often breaks down the math to figure out if it’s possible if a player block/stack can hit value or not. Minshew + Watkins + Goedert cost only $12.1k in salary and needed 48.4 points to hit 4x value. We could assume the Eagles get two TDs through the air with hopefully both of them going to Goedert or Watkins. With just those TDs (Minshew two, Watkins/Goedert two), you would already have 20 DK points, so you would need something like 250 passing yards from Minshew and nine catches with 100 yards from Goedert and Watkins to hit 4x. This was definitely reasonable to assume and ended up paying off 4.9x.

Second place finisher, Pimpinjoy, also played Minshew + Goedert with no run back. They rostered two Rams (Michel and Van Jefferson) who had the largest implied point (31) total and ran it back with Marvin Jones. Jefferson ($5.3k) has seen 8, 9, and 7 targets with Robert Woods out, and Michel was way underpriced with Henderson out and the Rams as a 14 point home favorite.

Third-place finisher, Josahood, had quite possibly the best leverage play on the slate in their lineup. 43.2% of entrants played Brandon Aiyuk while George Kittle was only 1.4% owned. Kittle went for 42 points while Aiyuk had only 8.5. Without Deebo, it made sense to play Kittle who was only $300 more. Shanahan has shown so far that Aiyuk isn’t his second or third favorite weapon on the offense, favoring Deebo, Kittle, and Mitchell. Rostering Kittle was also an easy way to differentiate your lineup because 42.6% of entrants paid down for Foster Moreau. This Kittle roster went a step further and correlated the Seahawks passing game with Russell Wilson and Tyler Lockett included as well.

This week we had several cheaper running backs in great spots: Sony Michel ($4.3k) with no Henderson as a 14 point home favorite; James Conner ($5.9k), who’s seen 20+ carries in three of four with no Kenyan Drake and as a 7.5 point home favorite; Elijah Mitchell ($6k), who has now seen 20+ attempts in three straight games and was a 2.5 point favorite; and Antonio Gibson who has seen 23+ attempts in three of four. All of these backs have been involved in the passing game lately as well. To top that off, we had Minshew starting at the minimum salary who had 15 games above 16 DK points (4x his salary this week) when he was with Jacksonville. We also had Foster Moreau at only $2.7k who went 6 for 60 and one TD on six targets last time Waller was out. There was a ton of value all over the place this week. I struggled this week because I didn’t recognize how strong some of these plays were.

We are pumped to announce we will be having a Bottom-Up Build Tournament of Champions! The TOC will take place Week 18 and first place will win an OWS Inner Circle-For-Life ⭕️ membership with additional prizes to other qualifiers! All weekly first-place finishers will be eligible. Congrats to those who have already qualified: Sgmain18, Spastictoaster, Swench1919, Mikeall65, abright8, Andkristopher, Sklarma72, Aothomas42, Jaymz_10, Ericdc20, Ottoball, Sobe1, and Bigdogkyle.