Total Entries :: 193 (167 eligible since 26 were disqualified for not using an OWS avatar and/or went over salary and didn’t enter a lineup) 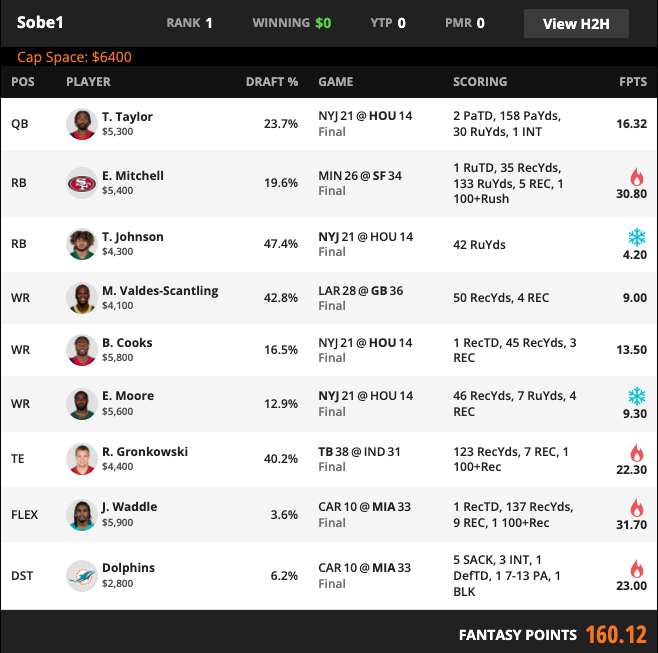 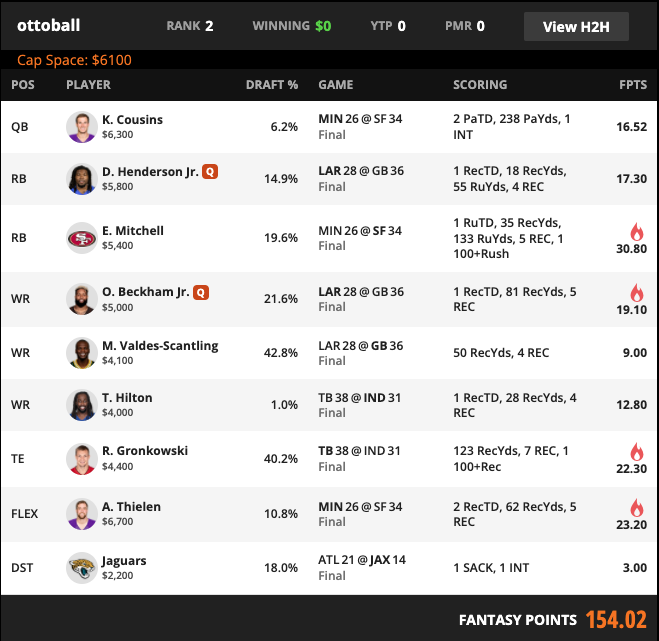 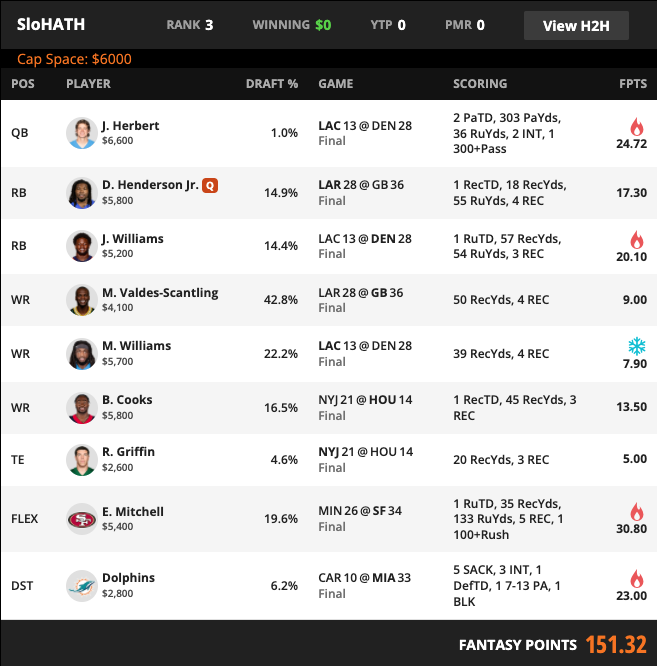 First off, we had the most entries in several weeks so thank you to everyone who participated. It’s awesome to see so many entrants this late in the season! And, thanks to everyone who played in the Thanksgiving Bottom-Up! I want to give a huge shout-out to Ottoball who placed second in the Thanksgiving contest and second in the Week 12 contest!  I’m giving you a TOC entry! Congrats and excellent work!

The winners from the Thanksgiving contest were:

First-place finisher, Sobe1, played a Texans double stack with a Jets double run-back (Tyrod Taylor, Brandin Cooks, Ty Johnson, and Elijah Moore). The game was only the seventh-highest total but had plenty of value in it. Although the stack didn’t go off, Sobe1 made up for it in other spots. Possibly the sharpest play was rostering the Miami D (6.2%) which was hard leverage against a high-owned Cam Newton (and Christian McCaffrey in paid contests). Both Sobe1 and third-place finisher, SloHath, were on this. If the Miami defense plays well, chances are that Cam has a so-so to bad game, sinking the lineups who rostered him. He was 12% owned in the Bottom-Up, the second-highest of all QBs (Tyrod Taylor was the highest at 23.71%). To top it off, Sobe1 found Jalen Waddle’s ceiling in the same game at only 3.6% owned. Waddle and the Dolphins defense were the difference makers for Sobe1.

Second place finisher, Ottoball, (who finished 2nd in the Thanksgiving BUB as well) built around the 49ers/Vikings matchup. They built a game stack consisting of Kirk Cousins ($6.3k, 6.2%), Adam Thielen ($6.7k, 10.8%), and Eli Mitchell ($5.4k, 19.6%). I thought Kirk was a good play. He was expensive, just $300 less than Herbert, but could have been an excellent price-considered pivot off Herbert if you thought Herbert would struggle in Denver, or if you were behind and needed to late swap to a lower owned Cousins. There was a little buzz around Garoppolo, but almost none around Kirk, even though both offenses had all of their playmakers healthy heading into the game. Adam Thielen had been scoring TDs on a consistent basis, eight heading into last week, but it hadn’t been since Week 1 where he had two in the same game. He’s quietly hit 30+ DK points twice compared to Jefferson, who has one (40.2), and Thielen now leads Jefferson in TDs 10-6. Ottoball played the stack the way Vegas was telling us, Vikings passing and 49ers rushing.

The top four finishers all rostered Eli Mitchell. He’s proven to be Shanahan’s guy without Mostert. With Garoppolo starting, Mitchell has touch counts of 27, 27, 8 (trailed AZ 17-0 in the second quarter causing the 49ers to only rush 11 times), 18, 18, 17, and 19. This was the second-highest total on the week and the 49ers were favored by 3.5. I was a little scared of Mitchell’s health coming back from surgery on his finger just two weeks ago, while also knowing that Jeff Wilson was healthy, but obviously Mitchell was good to go and Shanahan loves feeding him. Without these concerns, I knew he was a good play, and I wish I would have played him more. He only made one of my lineups and wasn’t on my Bottom-Up build.

The top two rosters were on Rob Gronkowski but avoided Michael Pittman (20.1%) who was the chalk bring back. Pittman saw ten targets and was a solid play but he only caught four of those targets. Ottoball brought it back instead with T.Y. Hilton at only 1% owned. Gronkowski at $4.4k was just too cheap considering the Bucs are the highest-scoring team in football, this was the highest-scoring game on the slate, and Gronkowksi is probably Tom Brady’s most trusted receiver of his entire career.

Overall, I thought this was a really weird week, especially in cash. The main play I was questioning was Cam Newton. Going into the slate, I couldn’t decide if he was a good play or not considering he had played just one full game this season, was in the lowest total game of the slate, and was playing a Dolphins defense that had been playing much better as of late (10, 17, 10, & 9 points allowed their last 4). The Panthers first drive led to a Cam rushing TD but the Dolphins adjusted, leading to the Panthers only getting a field goal off a fumble and Cam throwing two INTs and getting benched later on. Despite my doubts going into the slate, I played Cam in cash. I thought most rosters were going to have Cam, Cam + CMC, or CMC and I didn’t want to get burned by the field by not taking any of these. I chose Cam alone because I didn’t want to roster two players from the same team in the lowest-scoring game total, he was cheaper than CMC, and I knew I could get a little exposure to CMC through Cam. That decision was probably the one that helped me cash because I avoided CMC but who knows if it was a good decision or not with him getting injured.

We are pumped to announce we will be having a Bottom-Up Build Tournament of Champions! The TOC will take place Week 18 and first place will win an OWS Inner Circle-For-Life ⭕️ membership with additional prizes to other qualifiers! All weekly first-place finishers will be eligible. Congrats to those who have already qualified: Sgmain18, Spastictoaster, Swench1919, Mikeall65, abright8, Andkristopher, Sklarma72, Aothomas42, Jaymz_10, Ericdc20, Ottoball, and Sobe1.