Total Entries :: 147 (129 eligible since 18 were disqualified for not using an OWS avatar and/or went over salary and didn’t enter a lineup) 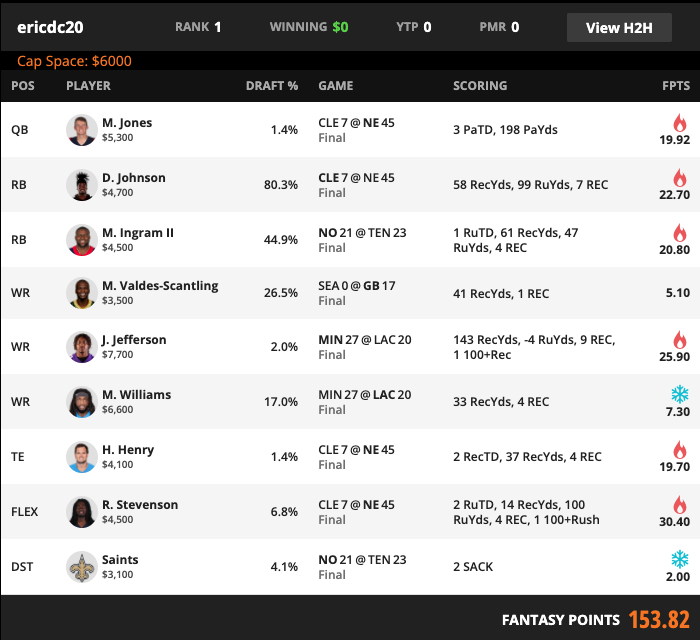 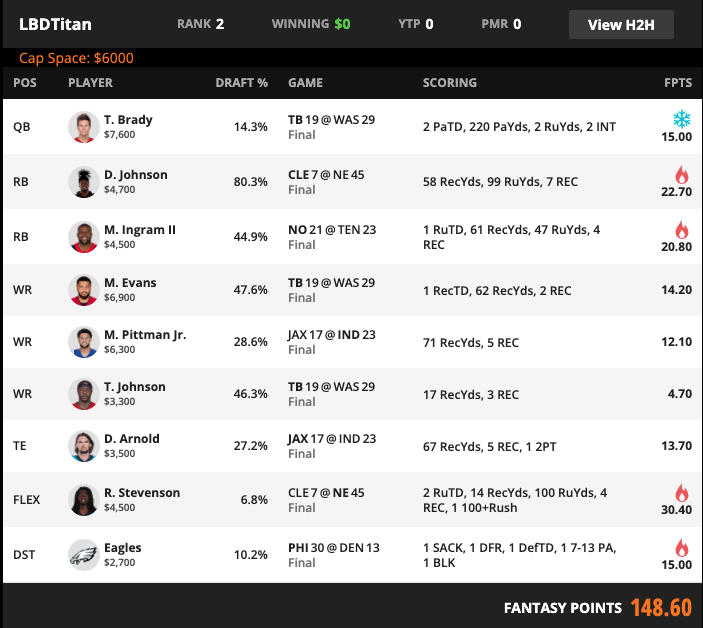 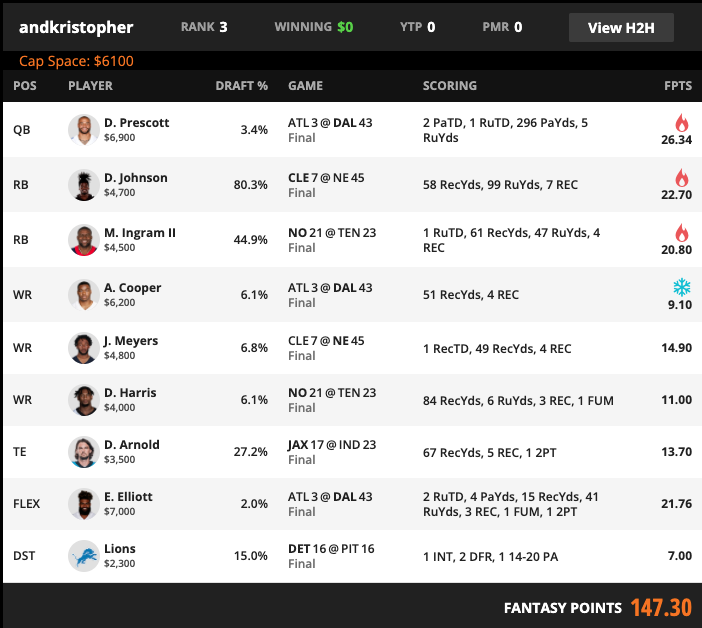 First-place winner, Ericd20, built their lineup around the Browns/Patriots game. They rostered Mac Jones, stacking him with Hunter Henry plus Rhamondre Stevenson, and they brought it back with D’Ernest Johnson. Vegas had this game as only the eighth-highest total on an 11 game slate, with the Patriots favored by 2.5 points. There was plenty of value to be had in this game. Johnson was projected to get all of the running back work for the Browns with Nick Chubb out. It didn’t really matter if the Browns were ahead or behind because Johnson is involved in the pass game. The Patriots (favorites) were without Damien Harris which led to Stevenson getting 20 carries and scoring two TDs. Mac Jones ($5.3k) has been a cheaper QB all season and had his first three TD game of the season. Ericd20 stacked Jones with Hunter Henry which paid off as Henry caught two TD passes from Jones. This stack wasn’t owned by anyone else in the field. EricD20 got on the right side of this game by rostering three players from the Patriots who put up 45 points, tied with the Bills for the most in Week 10. Finding value in this game environment allowed Ericd20 to pay up for another mini-correlation in the second-highest total game going into the week, the Vikings vs. the Chargers.  Although Mike Williams (7.3 pts) didn’t pay off, Justin Jefferson did (25.9 pts).

Lbdtitan chose to build his second-place lineup around the Bucs without a run back. The game had the third-highest total and the Bucs had the third-highest implied point total with Vegas projecting the Bucs for over four TDs (30.25 pts). The double stack of Tom Brady, Mike Evans, and Tyler Johnson didn’t really pay off but being able to get three players on a team projected for that many points, and being able to stay under the $44k salary max was sharp. He was able to get into the second-place spot by rostering the same three RBs as Ericdc20 did (Johnson, Mark Ingram, and Stevenson).

Congrats to Andkristopher who placed third this week and was also our Week 6 winner!  From a lineup construction standpoint, there were a lot of similarities with the second place lineup. They also had a double-stack with no bring back and were using the Cowboys, who like the Bucs, had a large implied team total (31.5, highest on the slate), and were in the highest projected point total game on the slate. They found enough value in other spots to pay up for Dak Prescott ($6.9k), Amari Cooper ($6.2k), and Ezekiel Elliot ($7k) who were in the highest total game.  This was a great lineup with the only real dud being Cooper.

This was a week where you didn’t need to roster a WR in the Flex to win the BUB or GPPs because we had so many good plays at the RB spot. It was also a week where a run back wasn’t necessary because the teams with the highest implied point totals were also large favorites. The Cowboys projected for 31.5 points and were favored by eight, the Bucs projected for 30.5 and were favored by 9.5, and the Bills projected for 31 and were favored by 13. With injuries, and several teams with high implied point totals and huge spreads, there were a bunch of RBs in play. The top three lineups in the BUB all rostered Johnson and Ingram, and the top two lineups in the BUB also had Stevenson. These same RBs were used in the Millionaire Maker and Redzone winning lineups. Johnson and Ingram were major chalk and in a bunch of winning lineups, but they were chalk for good reason since both were expected to get huge workloads for their price.

We are pumped to announce we will be having a Bottom-Up Build Tournament of Champions! The TOC will take place Week 18 and first place will win an OWS Inner Circle-For-Life ⭕️ membership with additional prizes to other qualifiers! All weekly first-place finishers will be eligible. Congrats to those who have already qualified: Sgmain18, Spastictoaster, Swench1919, Mikeall65, abright8, Andkristopher, Sklarma72, Aothomas42, Jaymz_10, and Ericdc20.