Total Entries :: 187 (162 eligible since 25 were disqualified for not using an OWS avatar and/or went over salary and didn’t enter a lineup) 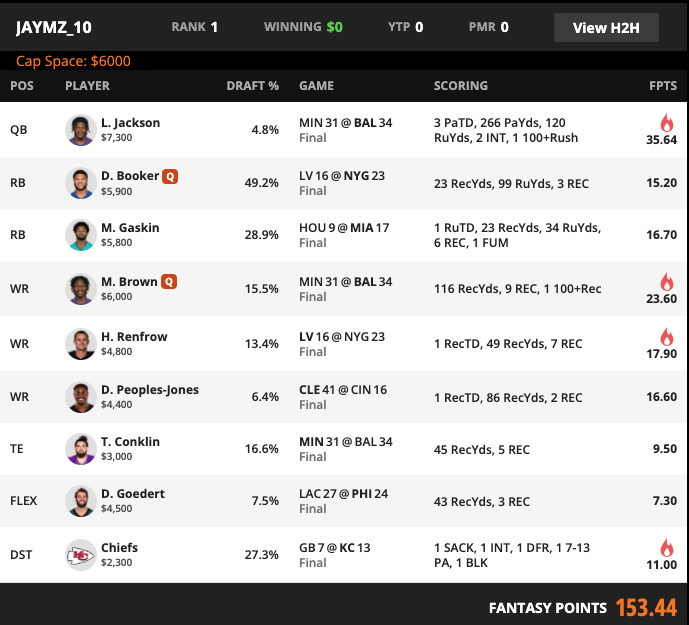 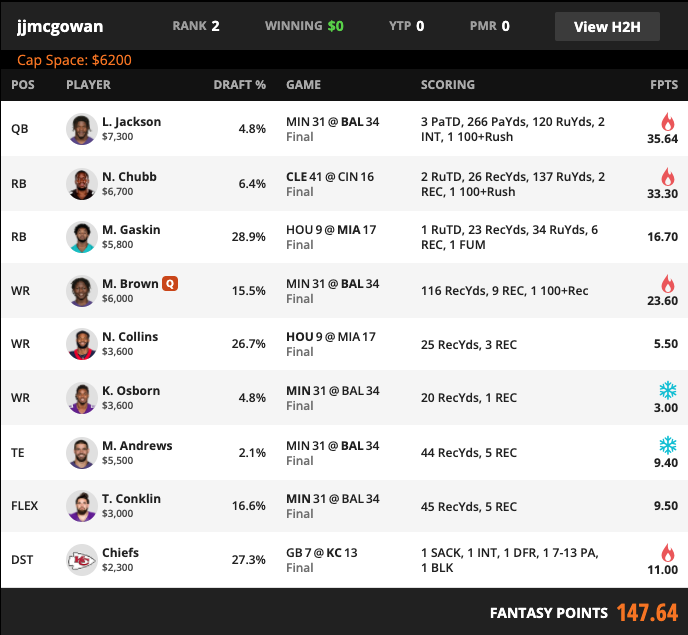 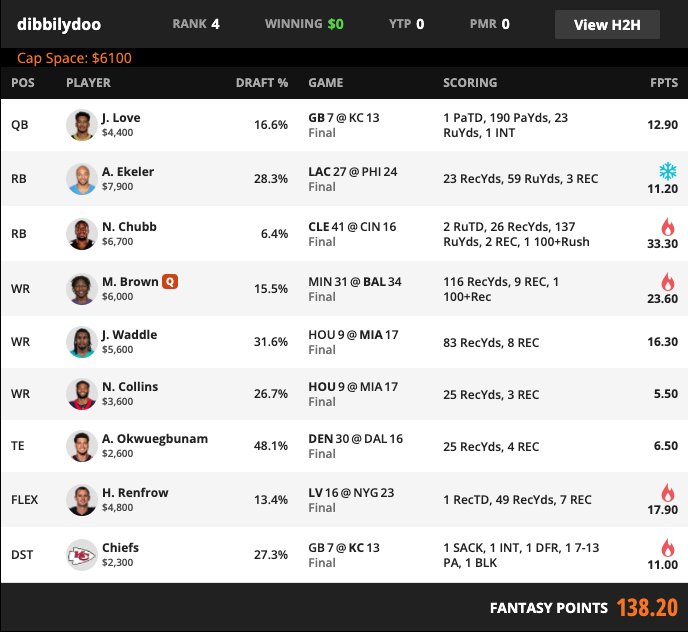 Jaymz_10’s winning score of 153.44 would have been good enough to cash in both GPPs and cash games in paid DK contests. The average GPP cash line was around 136 points, and in cash games, it was around 120. We had a lower scoring week in general. Jaymz_10 chose to play Lamar Jackson and Marquise Brown, running it back with Tyler Conklin from the Ravens/Vikings matchup. This game’s closing total tied for the highest on the slate (51) with the Ravens favored by seven. The Ravens implied point total closed at 29, the fourth highest out of 22 teams. They were projected to score four TDs and have been throwing on 65% of their offensive plays this season, the third-highest. The majority of the target volume on the Ravens has been through Marquise Brown and Mark Andrews (combined team target share of 49%) and Sammy Watkins was once again out. This game also had the benefit of going to OT and allowed Brown to score 10 more DK points on two OT drives.

Jaymz_10 and second-place finisher, Jjmcgowan, were able to pay up for Lamar Jackson and Marquise Brown by rostering two TE’s. Jjmcgowan’s double TEs both came from the Ravens/Vikings matchup (Conklin/Andrews), making his lineup a double-stack with run-back in what turned out to be the best game environment on the slate. JM talked about double TE being a viable strategy for the BUB tourney and in small-field contests on the Week 9 Angles Pod and he utilized this strategy in his own BUB this past week.

Third-place finisher, Dibbilydoo, played a naked Jordan Love, and although that didn’t pay off, he did have other similarities with the top two lineups. The biggest one for Dibbilydoo that Jjmcgowan also played, was paying up to get Nick Chubb in a spot where the Browns put up 41 points. Chubb rushed for 2 TDs and 137 yards. Because of Chubbs’ high price in a salary-restricted contest, he was only 6.4% owned (compared to 18-25% in paid DK contests).  All of the top three lineups played the Chiefs D. They were the highest owned defense in the BUB (27%), but for good reason with the restricted salary cap and cheap price of $2.3k.

Rostering two TEs can be a viable strategy, especially in the BUB, as long as we get a few things to happen on a given slate. As we get later in the season, DK pricing gets tighter, making it harder to access multiple players with 30+ point ceilings. We had several TEs this week that were cheap and in potentially high-volume roles. Albert O. was just $2.6k with Fant out in a game the Broncos were supposed to be trailing. Dallas Goedert was $4.5k with Ertz traded. Tyler Conklin was just $3k but is now averaging six targets per game over his last six. Cases could be made for several other TEs this week as well, so this strategy made sense, especially when we only had two games with closing totals above 50. Generally, low Vegas totals lead to a lower scoring fantasy week, so being right on the best game environment (BAL/MIN) was especially important this week as it gave you access to Lamar and Brown’s ceiling. The Ravens/Vikings game environment proved to be the winning ticket!

We are pumped to announce we will be having a Bottom-Up Build Tournament of Champions! The TOC will take place Week 18 and first place will win an OWS Inner Circle-For-Life ⭕️ membership with additional prizes to other qualifiers! All weekly first-place finishers will be eligible. Congrats to those who have already qualified: Sgmain18, Spastictoaster, Swench1919, Mikeall65, abright8, Andkristopher, Sklarma72, Aothomas42, and Jaymz_10